Swimming & Diving achieves record-breaking success
cadams
Mar 24 2017 9:35 AM
Share to FacebookShare to TwitterShare to LinkedInShare to PinterestShare to EmailPrint this page 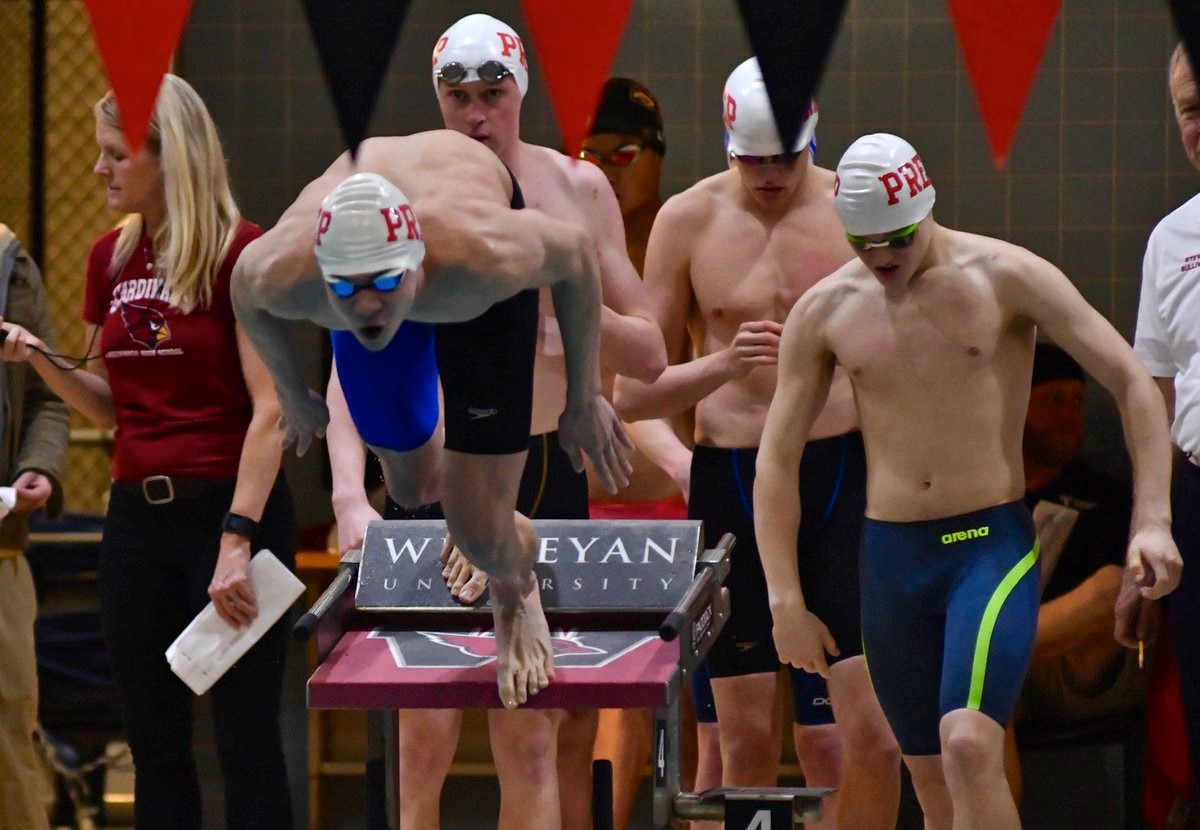 Streaks are difficult to maintain, records are hard to break and beating the most successful high school swimming team in the state does not happen often. Yet, through a combination of talent, grit and teamwork the Fairfield Prep Swimming & Diving team was successful in achieving all of those goals.

The season began well as the Jesuits got off to a 7-0 record rolling through the early portion of their SCC schedule. During those initial weeks, the core of the team emerged with strong contributions made by swimmers and divers across all four class years. The dual meet versus longtime rival and perennial State Champion, Greenwich High School, proved to be a milestone event. A bout of illness, that would plague Prep throughout the season, hit the week before the meet, leaving some questions entering the showdown at Greenwich High School. Liam Colleran '19, Oliver Rus '18, Stan Yarmoussik '18 and M.J. Duffy '17 opened with a win in the 200 medley relay, a great start to the meet (and the beginning of what would be a historic relay for the remainder of the season.) Freshman Richard Nolan won the 200 IM, but the Cardinals would then roll straight through to the 100 Fly taking a 14 point lead at the halfway mark. At this point the Jesuits would win 5 of the remaining 6 events, including a 1-2-3 sweep in the 500 freestyle led by Nolan, Michael Riina ’17 and Brody Biebel ‘19. When the 400 freestyle relay finished first, sealing a 98-88 victory, Prep had mounted one of their greatest comebacks and against one of their biggest rivals. It was just the 5th dual meet victory over Greenwich in program history.

A tough dual meet schedule awaited the Jesuits. Just five days after defeating Greenwich, a fired up Glastonbury team would storm into the RecPlex and push Prep before falling in the final relay. Highlighting the importance of team depth, Prep would only win 5 of 12 events against Glastonbury. Next were victories over rising SCC powers Notre Dame- West Haven and Hand (2nd & 3rd respectively at the Class M State Championships). With a win over Cheshire High School, Prep avenged a crushing loss to the Rams from last year and ended the dual meet season with a perfect 13-0 record.

Throughout the season various other team members took turns rising up and playing major roles on relays or scratching out key points in ways that do not get recognized in meet summaries. Andres Narvaez ’17 was the top diver and a steady presence as he faced some of the best divers in state history. And Ben Fox ’18, Andrew Magel ‘17, Kevin Lydon ’17, Andrew Lydon ’19, Jerome Larracuente ’17, Ethan Keyes ’19, Jack Rogers ’20, Alvin Gay ’19, Anthony Daccache ’20, Matthew Torres ’19, Roman Leito ’19, Jack Howard ’19, Flynn Coffey ’19, Ben Short ’20 and Alec Keblish ’19 competed at the LL Championships and/or made important contributions at various times during the dual meet season.

The SCC Championship is where Prep's depth shines. Team members who are not always in the starting line up at dual meets not only have a chance to score, but are often the deciding factor in the meet. In a complete team effort, 34 swimmers and divers would score helping Prep claim a commanding victory over second place Cheshire. It was the 13th consecutive SCC Championship for the Jesuits.

At the LL Championships, the Jesuits would face a rebounding Greenwich team that was ready to display its team depth and powerful diving line up. The Jesuits reclaimed their Runner-Up plaque after placing third last season. There were some impressive performances. Prep won 5 LL State Championships. The 200 Medley Relay (1:33.28) continued its amazing season holding off a powerful Ridgefield squad for the win. And the 200 Freestyle team of Rus, Yarmoussik, Duffy and Billy Duffy '18 (1:26. 48) would pull off a surprise upset over Cheshire and Greenwich. Oliver Rus was victorious in the 100 Freestyle (45.73) and 100 Breaststroke (55.27) and Liam Colleran won the 100 Backstroke (51. 85).

No season as successful as this one can happen without the commitment of the entire team to months of pool and dryland training. And a special thank you to the coaching staff of Jeanine Oburchay, Rob Urban and Vin Massey for their tireless dedication.