Prep Hockey wins Div. I State Championship!
cadams
Mar 19 2018 11:37 AM
Share to FacebookShare to TwitterShare to Google+Share to LinkedInShare to PinterestShare to EmailPrint this page 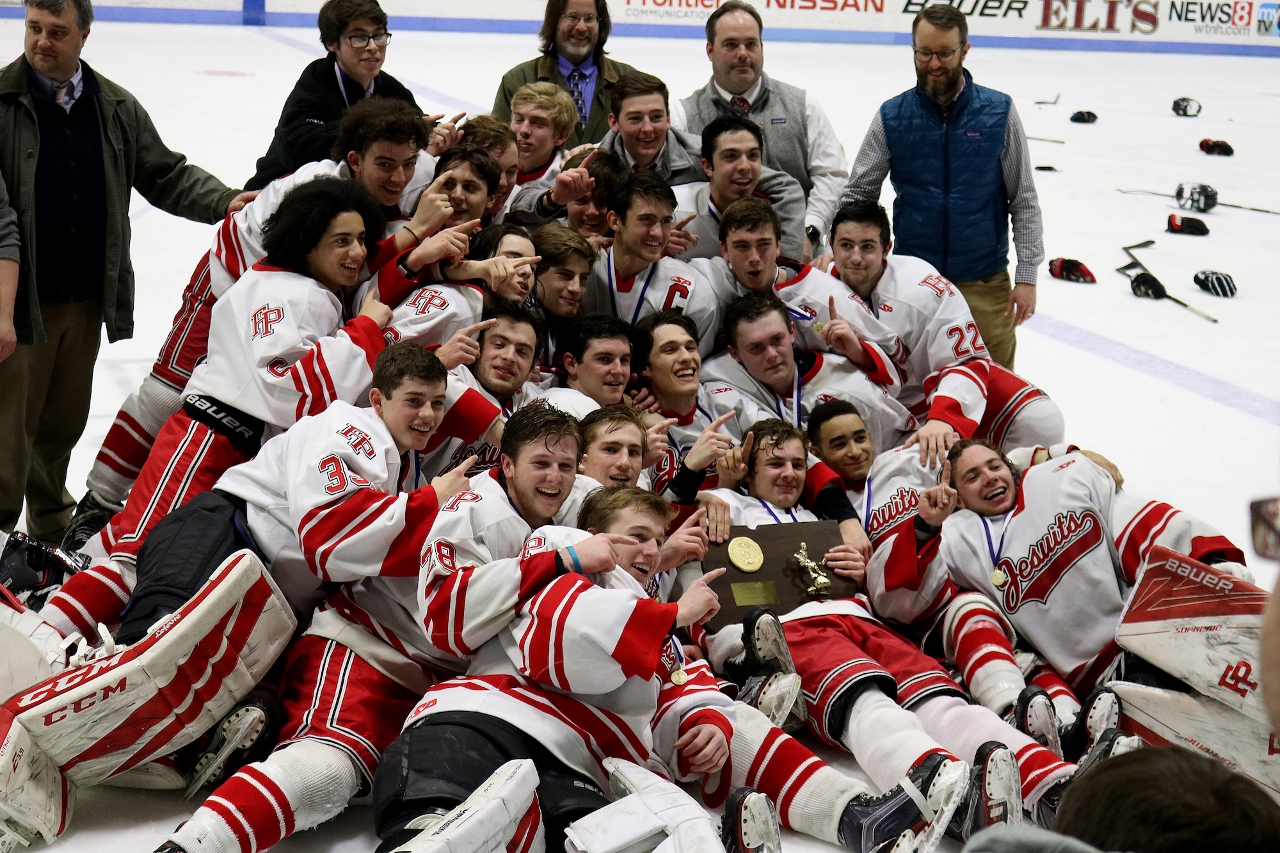 NEW HAVEN — Outshot, outscored and outplayed during the first two periods of its Division I hockey final against Greenwich, Fairfield Prep knew time was running out on it to get its game in gear and add another state title to its collection.

So Kevin Oricoli and Evan Uva made sure the Jesuits didn’t waste any time in taking the lead and turning the tables in their favor in the third period.

Oricoli’s goal with 12:29 remaining in the third period tied the score and Uva tallied the go-ahead goal at the 11:17 mark for the Jesuits, who used the quick, two-tally spurt to get back on top of the Division I hockey scene.

Two goals from Oricoli and one Uva third-period tally propelled top-seeded Fairfield Prep to a thrilling 4-2 win over second-seeded Greenwich in the championship game of the CIAC Division I Tournament at crowded Ingalls Rink.

The Jesuits (22-2-1), who added an empty-net goal in the last minute of play, now have 14 Division I hockey championships to their ledger.

“It was a long journey to get here with a lot of emotion involved,” Fairfield Prep coach Matt Sather said. “Hats off to Greenwich, they brought it and kicked our butts the first two periods. Then it was a pick-em game right down the line. The mood in the locker room was tight after the second period, but that’s why you need seniors. They had a quiet confidence that they could do it.”

As exciting as the victory was for the Jesuits, that’s how heartbreaking it was for the Cardinals, who held leads of 1-0 and 2-1. Senior forward Matt Baugher scored both of the Cardinals’ goals. GHS was seeking its first state title since 1992.

“I was pleased with what we were doing and how we were executing,” GHS coach Chris Rurak said. “We outshot them, unfortunately, just two little mistakes and that’s all it takes. Our kids are upset, but I told them they should be tremendously proud.”

Senior goalie Jack McGee made 24 saves for Prep, while sophomore goaltender Ben Nash stopped 15 shots for the Cards. The game’s go-ahead goal occurred with 11:17 remaining in the third period. Uva sent a slop shot from the blue line that found its way to the back of the net, putting Prep on top, 3-2. Uva played the game with an injured elbow, but it sdidn’t prevent him from leading the squad to victory in the final game of his high school career.

“I suffered a minor injury on my elbow, but I fought through it,” Uva said. “I was going to play regardless — I was not going to sit out. Playing here in this arena in a game like this is something I have been dreaming about since I was eight years old.”

Trailing 2-1, the Jesuits knotted the score when Oricoli received a pass from Carter Kral and snapped a shot by Nash from between the circles with 12:29 left in the final period.

“Greenwich really came out strong and we came into the locker room after the second period frustrated, but we calmed down and played our game in the third period,” Oricoli said. “We have been down before and came back.”

Baugher gave GHS a 2-1 edge in spectacular fashion. Senior forward Alex Mozian slid the puck across the ice to freshman forward Thatcher Danielson, who was positioned at the right wing. Danielson moved the puck to Baugher, who from several feet below the right face-off circle snapped a shot from an extremely tough angle that went over McGee’s right shoulder and settled inside the left corner of the net, giving Greenwich a one-goal lead at the 8:55 mark of the second period.

A Cardinals tripping penalty put Prep on a power play with 2:47 left in the second period, but the Jesuits couldn’t capitalize. Baugher nearly scored his third goal of the game, but his shot hit the pipe just as the buzzer sounded to end the second period.

The Cards held a 9-5 shots-on-goal edge in the second period and entered the third period with a 20-12 advantage on shots.

“We had a lot of momentum in the first and second periods, then we ran out of gas a little bit in the third and they came out with the ‘W’,” Baugher said. “They are a very fast team that gets the puck on net well.”

Greenwich scored the game’s first goal with 13:03 remaining in the first period. Positioned in front of the net, Baugher controlled the puck off a rebound and one-timed it past McGee’s glove inside the right post, giving the Cardinals a 1-0 lead.

The Cardinals went on a power play shortly after Baugher’s goal, but didn’t extend their lead, despite applying pressure in the Jesuits’ zone. Fairfield Prep tied the score with 7:25 to go in the opening period, courtesy of Oricoli. Handling the puck inside Greenwich’s zone, Oricoli found space in between the circles and snapped a wrist shot the went past Nash and found its way into the upper right corner of the goal, making it 1-1.

McGee made 10 first-period saves for the Jesuits, who were outshot, 11-7, during the first 15 minutes of play. Nash stopped six shots for Greenwich, which had the period’s only power play. Oricoli kept the pressure on the Cardinals during the first period, registering three shots on goal, while Alex Mozian had four shots for GHS.

The Cardinals almost tallied the equalizer with 4:30 to go in the third period, as a shot from the point bounced off McGee’s pads and settled into the net. But the goal was disallowed, because the net was moving as the shot was being taken.

PLAYERS OF THE GAME

Oricoli’s two goals were key for the Jesuits, as they tried to hold off the Cardinals, who came out flying the first two periods.

Prep will long remember Uva’s winning goal and McGee was clutch in goal.

“Kevin gave us a great effort today on both ends of the ice, Evan brought the energy to our defense and our goalie has been our best and most consistent, player all year,” Sather said.

Greenwich bids farewell to seven seniors, some of whom include Mozian, the team’s leading scorer, Baugher, and defensemen Connor Santry, and Oliver Fulton and forward JT Lawrence.

“This was a great group of kids that still made some history, winning 18 regular-season games,” Rurak said. “The kids are of course, upset and disappointed, but they should be tremendously proud.”

“We improved so much during the course of the season, that was the key for us,” Sather said. “Our seniors, some of whom spent four years on the team provided great leadership.”