Eckert and Kovaleski receive Fairfield Police Union Scholarships
cadams
May 16 2018 3:13 PM
Share to FacebookShare to TwitterShare to Google+Share to LinkedInShare to PinterestShare to EmailPrint this page 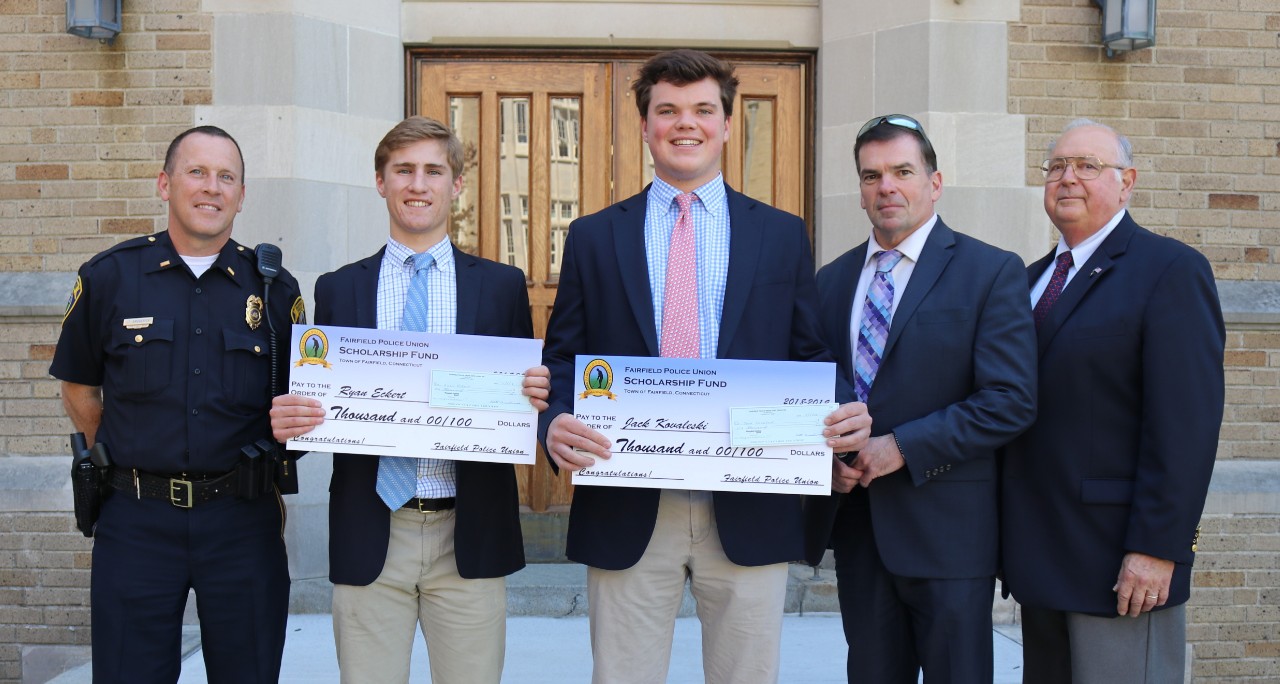 Prep seniors Ryan Eckert and Jack Kovaleski were awarded Daniel Caruso Memorial Scholarship Awards from the Fairfield Police Union Scholarship Fund. The fund was created to honor the life work of Judge Daniel Caruso who passed away unexpectedly in February 2018. Judge Caruso, who served as Fairfield Probate Judge, was an advocate for anyone and everyone who needed help in the community. Caruso embodied the spirit of community and civic duty, always putting service above self. He was a man of strong faith and believed in always helping those in need. Eckert and Kovaleski were both nominated based on how they emulate these qualities.

Ryan Eckert is an excellent example of a student, athlete and school leader who fully embraces Fairfield Prep's Jesuit mission of service to others. As Captain of the ice hockey team, Ryan's athletic ability and leadership skills were on full display this past season as he led Prep to the Division I State Championship. Within the school Ryan is known as an active and enthusiastic member of the community who students, faculty and staff search out for leadership positions. He was selected to serve as a student leader on Kairos, a four day spiritual retreat, as well as Urban Plunge, a three day service immersion project in Bridgeport. Ryan contributes to the surrounding community as well, serving as a Junior Deacon at Greenfield Congregational Church and attending its Appalachian Service project in Virginia for three years. And for the past two years, Ryan has performed Christian service work teaching ice hockey through Connecticut Storm and tutoring at-risk students at the Urban Impact Center in Bridgeport. Ryan will be attending Syracuse University in the fall.

Jack Kovaleski is a valued and integral member of the Fairfield Prep community. He has been a member of the football team for four years and played on the golf team as well. Jack is a dedicated and supportive community member at Prep, serving as a Freshman Retreat Leader, a Kairos Retreat leader, a Peer Ministry leader and a participant in Prep's Appalachian Service Immersion trip to Fries, Virginia. He has volunteered at the Connecticut Food Bank, Operation Hope and at the Bridgeport Rescue Mission and has committed to serving at the Jewish Home for the Elderly. Jack caddies at the Patterson Club, and works part-time at Athletic Shoe Factory. Further demonstrating his work ethic, he has his own business—Jack's Lawn and Snow Removal. Jack is well known as the kind of person who is always willing to step up and go the extra mile for those in need and will bring his desire to serve and learn to the University of Dayton where he will begin study in the fall.