Athletic Hall of Fame honors Prep's Greatest!
cadams
Jun 9 2017 4:59 PM
Share to FacebookShare to TwitterShare to LinkedInShare to PinterestShare to EmailPrint this page

Prep honored four individuals and one team at its inaugural Athletic Hall of Fame, held on June 2, 2017, in Prep's Pelletier Quad. Approximately 300 attended a spectacular evening, with Master of Ceremonies Traug Keller '78 P'11,'17 (SVP, ESPN). Alumni, family and friends enjoyed tributes to all of our honorees. Prep alumni  will never forget, “We may laugh, we may cry, but we never say die. Let’s go Fairfield! Fairfield, let’s go!”

Chris is arguably the most decorated athlete in Prep’s history. From 1991-1994, Chris set numerous scoring records while at Fairfield Prep. He was a 2-time All-State Player in 1993 and 1994 and Connecticut’s Division 1 Player of the Year in 1994. Chris helped Boston University reach the Frozen Four three times and won the NCAA Championship in 1995. He was a finalist for the top player in collegiate hockey three times, winning the award in 1998. After college Chris played 12 seasons in the NHL and won the Rookie of the Year Award in1999. Chris is currently Assistant General Manager of the New York Rangers.

Paul may be the most talented all-around athlete in school history. A two-way player in Football (Quarterback and Safety)helped lead Prep to a MBIAC Championship in 1973. In addition to football, Paul excelled on the basketball court and started at shortstop for Prep’s baseball team for three seasons. In 1974 he was the MBIAC Baseball MVP. After Prep, Paul attended Harvard and led the Ivy in interceptions his senior season and was a three-year starter on the Crimson’s baseball team. Halas won Harvard’s Scholar Athlete Award and graduated with honors from Harvard and Harvard Law School.

Jim Fitzsimons has the distinction of being the only basketball player in school history to be named All-American. “Fitz” still holds the school record for career points and points in a single game. He was league MVP and won the State Championship in the ’68-’69 season. After first going to Duke, Fitz transferred to Harvard and is still the school’s single season scoring leader. Jim was inducted to the New England Basketball Hall of Fame in 2006.

Earl Lavery was the face of Fairfield Prep Football for 28 years. “The Duke” coached five unbeaten teams, won or shared 13 MBIAC titles, won three State Championships and had 14 teams finish in the state’s Top 10. Earl was elected to the Connecticut High School Coaches Hall of Fame in 1991, received the prestigious Gold Key Award from the Connecticut Sports Writers Alliance 1996 and entered the Fairfield County Sports Hall of Fame in 2013.

Under Coach Joe Brosley, the 1960 Fairfield Prep Football team was Prep’s first State Championship Team. The team finished the season with a 10-0 record, outscoring their opponents 352-36 and recording six shutouts. 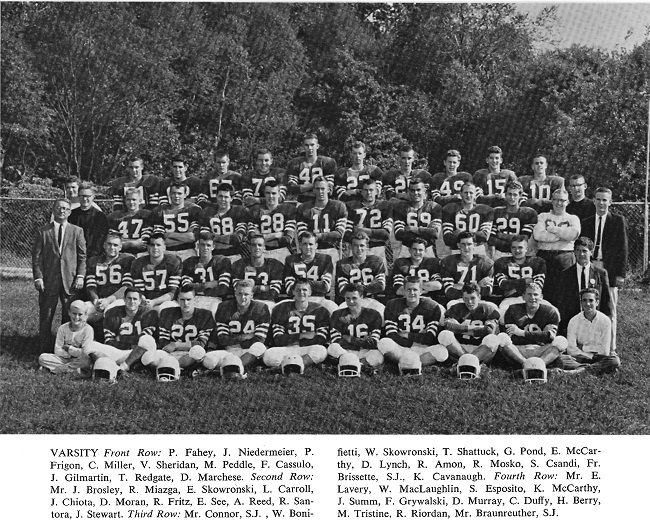