Prep LAX wins Class L Championship
cadams
Jun 11 2012 9:39 AM
Share to FacebookShare to TwitterShare to Google+Share to LinkedInShare to PinterestShare to EmailPrint this page

Optimum Subscribers may watch a re-broadcast of the game:
Watch the game on iO TV Channel 14, Monday, June 11, at 7:30 PM
Watch the game anytime after 6/13 on iO Channel 614 and on MSGVarsity.com 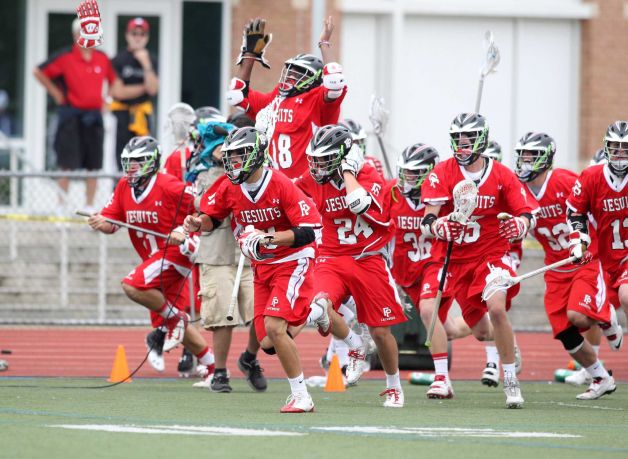 NORWALK -- Fairfield Prep goalie Mike Seelye had not slept in two days. The anticipation and excitement of avenging his self-proclaimed "worst day of my life" was far too potent for sleep to penetrate. Despite his insomnia, Seelye carried Prep to a height it hadn't reached since 2009.

The senior goalie stopped 18 shots, six in the fourth quarter, as the fifth-seeded Jesuits held off No. 3 Ridgefield 8-6, claiming the Division L state championship on Saturday at Casagrande Field. "(Seelye) made some great saves," Prep coach Chris Smalkais said. "I've watched him grow as a young man and as a player and I know he'll have a successful college career and life."

The Jesuits avenged a 2011 state final loss to the Tigers -- a game Seelye was forced to exit in the first half with a punctured lung -- to claim their first state championship in three years. The combination of Prep's loss last season, and his hospital trip, left Seelye with bad memories. Those were exorcised Saturday by the Jesuits' final game win. "Last year I thought it was going to be the worst day of my life and it might have been, so far at least," Seelye said. "Today couldn't be a better feeling. There's nothing more I've wanted for an entire year now."

Jesuits senior Matt Brophy scored four goals and Kevin Brown scored two and assisted another. Austin Sims scored once and had two assists and David White had two assists. "These guys have been doing it all year," Brophy said.

Senior Tim Kelly scored three goals for Ridgefield as it was held to a tie for its second lowest single-game goal output all season. The Tigers finished their season 18-5. "We turned it over too often," Ridgefield coach Roy Colsey said. "We gave them too many chances."

The teams combined for eight fourth-quarter goals, with each team potting four. Ridgefield's defense doubled Brophy, and Brown took over early in the fourth. The junior scored two goals and assisted on Austin Sims' mark, lifting Prep's advantage to 7-2.

"Kevin Brown is a goal scorer," Brophy said. "At the end of the day, if you give him the ball, it's going in the back of the net." Kelly and Prep junior attack Tim Edmonds traded goals and Prep was up five with just 3:15 remaining. But Ridgefield's offense came to life, netting three goals in 1:59, capped by defenseman Sam Gravitte's goal that cut Prep's lead to 8-6 with only 1:09 remaining. The Tigers could not get closer than that. "I'm proud of my kids for not quitting," Colsey said. "They could've packed it in. That's a testament to their character."

Brophy dominated the first half, scoring all four of his goals, including his first just 24 seconds into the game. After Kelly tied the score, Brophy scored the next three. "I kind of got on a roll there," Brophy said. "Our offense was moving the ball around there really well."

Despite being shut out in the third quarter, Prep carried a 4-2 advantage after three. Seelye and the Jesuits defense thwarted Ridgefield at every turn in the game's first three quarters. Ridgefield maintained possession for much of the second and third, yet were held to just two goals on their first 19 shots.

"Their defense played very well," Colsey said. "And at the end of the day, when we did get shots, (Seelye) was all over them." Prep's defense allowed just one even-strength goal in the game's first 44:52. The Tigers scored two man-up goals in that stretch, both coming from Kelly. "I thought we prepared great for what they wanted to do offensively," Smalkais said. "It's a credit to all our players, and they fulfilled the dream today."