Class of 2012 graduates as brothers

Class of 2012 graduates as brothers
cadams
Jun 7 2012 11:43 AM
Share to FacebookShare to TwitterShare to LinkedInShare to PinterestShare to EmailPrint this page 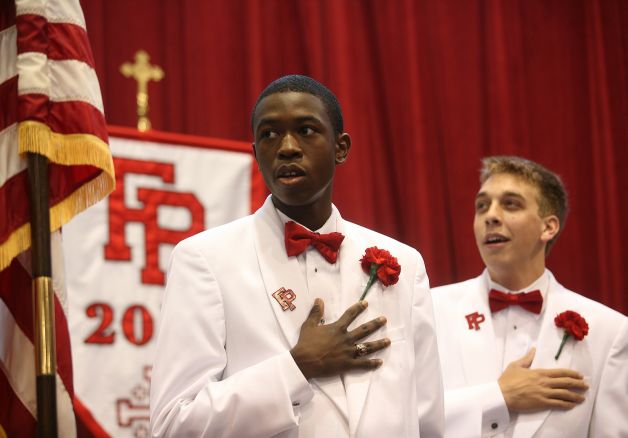 The 70th commencement exercises of Fairfield College Preparatory School on Sunday included a tribute to the past, a glance into the future and a reminder of the brotherhood shared by the 227 graduates of the Class of 2012.

In his farewell address, senior speaker Robert Salandra defined a family as "those who laugh together, cry together and share moments together." Together, the graduates shared the joy of completing one facet of their lives and moving on to the next, he said.

There was plenty of laughter during the graduation ceremony as the graduates and audience at Alumni Hall, on the campus of Fairfield University, responded to the remarks of Salandra, the Rev. John J. Hanwell, S.J., Fairfield Prep's president, and commencement speaker, the Rev. James Martin. S.J.

Martin, an author, contributing editor for America magazine and "chaplain" of Comedy Central's "The Colbert Report," told the graduates to "lighten up" and not take themselves too seriously. He said many Christians have a hard time imagining Jesus as someone who laughed and had fun. "But he surely did ... He was fully human, which meant he had a sense of humor," Martin said. "Humor and laughter should be an important part of your life."

Quoting from the Book of Ecclesiastes, Martin said, "There is a time to mourn" and "There is a time to laugh." Unfortunately, the ceremony had both. Word spread through the crowd that the father of graduate Kevin Thomas Sinclair died Saturday, the eve of the graduation. As Sinclair received his diploma and walked back to his seat he was bolstered by sustained applause.

"It was a show of support for Kevin and his family," one school administrator said.

Graduates also mourned the loss of two students during their four years at Fairfield Prep, both of whom were mentioned in Salandra's speech: Ryan Brennan from the Class of 2011 and Bradley Helt, of Westport, a junior and member of the Prep swim team who died in April.

Hanwell paid tribute to the Class of 1962, some of whom were on hand Sunday to mark the 50th anniversary of their graduation. He said they were the Class of 1962 was the 20th to graduate from Fairfield Prep and the fourth whose commencement was held at Alumni Hall. He surprised the audience by singing the opening lines of some songs and television themes popular in 1962, such as "Moon River," "The Lion Sleeps Tonight" and Ray Charles' "I Can't Stop Loving You."

"This is a whole other side of the man I've never seen," one parent said of Hanwell, who also whistled the theme of the "Andy Griffith Show."

Hanwell told the crowd that in 1962 a loaf of bread cost 24 cents, a dozen eggs 54 cents, and a gallon of gas was 31 cents. The annual tuition at Fairfield Prep, when the Class of 1962 entered as freshmen, was $315, Hanwell said, to the groans of many parents.

Hanwell said the world has changed considerably since those men were students at Fairfield Prep. The world's culture has morphed from telephone booths to Skype, from print books to Facebook and from firewood called kindle to a Kindle reading device.

More changes are in store for the Class of 2012 as the years pass, and Senior Class President Patrick Barthelemy asked fellow graduates to "embrace the future and what it has in store for us."

"It's a bittersweet feeling. It's an exciting future but we're going to miss the faces we saw every day," said Robert Nick, 18, of Fairfield, who will study international business at Elon University.

"It's sad to leave. I built a strong relationship with my classmates, a brotherhood. I'm leaving my brothers behind," said Doug Prescott, 17, of Fairfield, who plans to major in physics and sociology at Tulane University.

Serge Jean-Baptiste, 17, of Norwalk, said he not only miss his classmates, but also the school environment at Prep. "It's so unique and so different. I don't know if they'll have that atmosphere in college," said Jean-Baptiste, who will attend Stonehill College to study biology.

Graduates shared their celebration with hundreds of family members, many of whom could not contain their excitement. The family of Allen Quoc Trung Pham, 18, of Bridgeport, filled a stairwell at the beginning of the commencement exercises to get a photograph of Pham during the procession into Alumni Hall.

"I was so proud. He looked so handsome in a tux," said sister Julie Pham, 16. As dictated by Fairfield Prep tradition, all of the graduates were outfitted in formal wear of white jackets, black pants, red bow ties and a red carnation boutonniere.

"I was about to cry. He's so grown up. He's my baby brother. He's about to move on in life. It's a big moment for him," said Jenny Pham, 22. They were accompanied by their mother Lily Pham and father Mai To.