Fr. Jim Martin, S.J., is Grad speaker
cadams
May 9 2012 6:16 PM
Share to FacebookShare to TwitterShare to LinkedInShare to PinterestShare to EmailPrint this page
Noted author and broadcast commentator 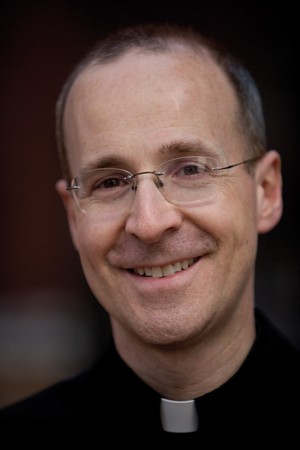 Fairfield Prep is pleased to announce Rev. James Martin, S.J., will be the featured speaker at the 70th Commencement on June 3 at Alumni Hall, Fairfield University. Father Martin is a Jesuit priest, author and contributing editor at America, the national Catholic magazine. He has commented on religion and spirituality in the national and international media, and he has appeared on all the major radio and television networks, and in venues as diverse as National Public Radio's "Fresh Air with Terry Gross," NPR’s “Weekend Edition,” PBS’s “Newshour,” Comedy Central’s “The Colbert Report” and Fox News Channel's "The O'Reilly Factor," as well as ABC, NBC, CBS, CNN, MSNBC, PBS, The History Channel, the BBC and Vatican Radio.

Father Martin is also the author of several award-winning books. His most recent book is Between Heaven and Mirth: Why Joy, Humor and Laughter are at the Heart of the Spiritual Life, (HarperOne, 2011), which was named as one of “Best Books” of 2011 by Publishers Weekly. Among his other books, The Jesuit Guide to (Almost) Everything: A Spirituality for Real Life (HarperOne, 2010), a New York Times bestseller, was awarded a 2010 Christopher Award, and was also a number one bestseller in Catholic books. His memoir My Life with the Saints (Loyola, 2006), which received a 2007 Christopher Award, was named one of the "Best Books" of 2006 by Publishers Weekly, and also received a First Place award from the Catholic Press Association. My Life with the Saints has sold over 120,000 copies and is used in universities, high schools, parishes and book clubs around the world, and was chosen for use in hundreds of U.S. parishes through the Dynamic Catholic Program. His book A Jesuit Off-Broadway: Center Stage with Jesus, Judas and Life’s Big Questions (Loyola, 2007), was named one of Publishers Weekly’s “Best Books” of 2007 and was awarded a First Place award from the Catholic Press Association.

Besides articles in Catholic publications like America, Commonweal, U.S. Catholic, Catholic Digest and The (London) Tablet, Father Martin has written for, among other places, The New York Times, The Wall Street Journal, The Boston Globe, The Chicago Tribune, The Philadelphia Inquirer, O Magazine and other newspapers and websites, including Slate.com, The Huffington Post and The New York Times’ and The Washington Post’s websites.

James Martin was born in Plymouth Meeting, Pa., and graduated from the University of Pennsylvania's Wharton School of Business in 1982, where he received a bachelor's degree in economics (B.S. Econ.) with a concentration in finance. After working for six years in corporate finance with General Electric in New York City and Stamford, CT, he entered the Society of Jesus (the Jesuits) in 1988. For his various ministries, Father Martin has received Fordham University’s Gaudium et Spes Award, the Ignatian Volunteer Corps’s Madonna della Strada Award, and the Loyola Institute of Spirituality’s Writers’ Award. He received an honorary Doctor of Divinity degree (D.D.) from Wagner College in New York 2007, and honorary Doctor of Humane Letters degrees (D.Hum.) from Wheeling Jesuit University in West Virginia, from Sacred Heart University in Fairfield, CT, in 2010, and from Le Moyne College in Syracuse in 2011.