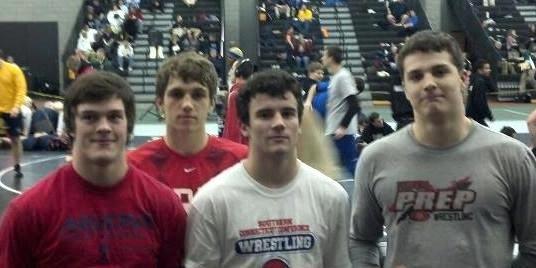 The Prep wrestling team had a strong season, one of the best in Prep history. With a 9-13 record, the team has made immense progress in its program, beating major rivals Cheshire, Law and Amity. One of the greater achievements of the year was having four Academic All-State wrestlers, Seniors Joey Roberts and Shane Dempsey, Junior Conor Ward, and Sophomore Nick Crowle. Having four wrestlers qualify for the State Open is something that has not happened in recent Prep history. Other highlights of the season included: Joey Roberts notching his 100th career win; Shane Dempsey being the #1 seed at the LL tournament; senior Thomas Voreyer winning the Ludlowe Tournament for a second time; and senior Jake Pesci‘s domination of the 195 weight class. These four captains believe the future of Prep wrestling looks bright under the leadership of Coaches Rich Rapice and Corey Dennis.

Some upcoming wrestlers to watch out for are the new captains, Conor Ward '13, Nick Crowle '14, Matt Barnett '13, and Dave Maloof '13, as well as freshman Matt Freed. After such a good season, the team hopes to come back next season with improved skills and new wrestlers willing to rise to the occasion.