"They're good," Prep coach Leo Redgate said. "We fought hard, we almost had to be perfect every time down the floor."

Hillhouse-- who missed Anderson for the second straight game with a Charley horse-- will play No. 1 St. Joseph in the Class LL finals, Saturday at Mohegan Sun Arena at 6:15 p.m. "We rallied together," Hillhouse coach Renard Sutton said. "I think we're one of the most solid programs in the state."

Prep senior Terry Tarpey scored a game-high 22 points, adding 10 rebounds, five blocks and four assists in his final high school varsity game. "We made it to the semifinals of states," Tarpey said. "I'm not as happy as I could be, but I'm happy with the results of four years here."

Hillhouse's defense denied Tarpey the ball in the second half, holding the College of William and Mary-bound guard to just five second-half points. The Academics outscored Prep 32-20 in the second half. "I was supposed to be in the middle, and there were three guys in the middle," Tarpey said. "Credit to them¦ They took me out of the system."

After a frenetic first quarter, in which Tarpey scored 12 and the Jesuits led 21-18, Hillhouse slowed the tempo. Bynum ran the point, got to the basket and dished off for layups. Bynum had five assists in the game, and the Academics led 28-27 at halftime. "They did almost the same thing every time, they set a high ball-screen and roll off," Redgate said. "With a team that talented, it's kind of indefensible."

With Hillhouse denying the ball from Tarpey, Prep junior forward Tim Butala took over in the third quarter, scoring eight of his 10 points, boosting the Jesuits to a 35-32 advantage. "They've got other guys who can play the game too," Sutton said "You don't make the final four with just one guy."

But a 10-0 Hillhouse run, spearheaded by two 3-pointers from Bynum, gave the Academics the lead for good, and their largest advantage, 42-35. "They weren't missing shots," Redgate said. "They killed us from the outside."

Tarpey tried to will Prep back into the game in the fourth, with a banked 3-pointer from the corner, a put-back layup and an assist on Mike Matera's 3-pointer that cut Hillhouse's advantage to 45-44. "He's an exceptional talent," Sutton said of Tarpey.

But the Academics closed the game with a 15-3 stretch where they made 13 of 14 free throws. Hillhouse--which shoots less than 70 percent as a team for the year-- made 14 of 16 foul shots in the final frame. "We focused at the free throw line," Sutton said. "It got us a big win."

"I was willing to take a chance to see if maybe they missed a couple," Redgate said. "And they hit them." 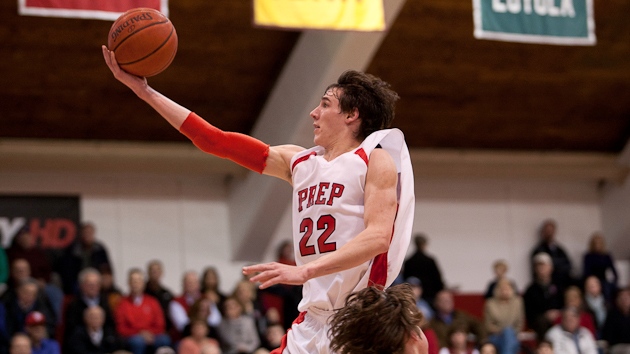 FAIRFIELD -- The Fairfield Prep basketball team used a familiar formula to get to the Class LL semifinals for the second straight year. The Jesuits played some defense, went on a huge second-half run and got a whole lot from Terry Tarpey. The senior captain scored 26 points, grabbed 13 rebounds, blocked seven shots and recorded four assists in his final home game as the No. 6 seeded Jesuits beat No. 14 New Britain 59-48 in the Class LL quarterfinals at Alumni Hall. "It's exciting," Tarpey said. "New Britain's a good team, and I'm happy to get the win." "It's great for the program," Prep coach Leo Redgate said.

Senior guard Mike Matera scored 11 point and junior Tim Butala added 10 as Prep improved to 22-3. The Jesuits advanced to play conference-rival and second-seeded Hillhouse in the state semifinals on Wednesday at 7:30 p.m. at East Haven High School. "(Hillhouse) is terrific," Redgate said. "The conference is underrated by people (in Fairfield County)."

New Britain sophomore forward Craven Johnson scored 17 and grabbed 10 rebounds before fouling out. The Golden Hurricanes finished their season 14-10, just a year removed from a 5-15 campaign. "I was proud of their effort," New Britain coach Todd Stigliano said. "It hurts ... but to see what we accomplished is fantastic."

After falling behind 31-29 in the first three minutes of the third, Prep erupted on a 22-8 run between the frame's end and first 2:43 of the fourth. Five different Jesuits scored on the spurt, with Tarpey pouring in six. "He's a special basketball player," Stigliano said of Tarpey. "You don't see too many people like him. He has all the tools ... and he has every intangible ... and they're a good team."

The run was keyed by the Jesuits forcing Johnson's third foul early in the quarter and good interior defense by Tarpey, Butala and Ryan Blake that led to layups on the other end. "I got some steals and it led to some transition buckets," Tarpey said. "I think that's where the spark came."

"If you let them clean up on the boards, it's just a fast-break drill," Stigliano said. "A lot of that run ... we got killed on the glass and missed a lot of chippies on our end." Matera and Prep held senior guard Devonne Nolan-- who scored 30 points in the Golden Hurricanes' second-round, upset win over No. 3 Hartford Public-- to only nine points, and just three in the second half. "Everyone played really good help-side defense," Matera said.

The Jesuits' run was reminiscent of the 29-8 surge they had in their 62-53, second-round state tournament win over Westhill. "It's how we play," Tarpey said.

Johnson dominated the first quarter, scoring six, on his way to nine in the first half. Johnson also grabbed six rebounds in the opening 16 minutes. "He works very hard," Tarpey said of Johnson. "When you work hard, that's how you get rebounds." But Tarpey scored 16 of his 26 in the first half, eight of which came on a 13-2 run that gave the Jesuits a six-point advantage. Butala and Tarpey also closed the frame with an 8-2 spurt that gave the Jesuits a 27-23 halftime lead.

"I'm very proud of the boys," Redgate said. "There were many times where we could have folded like tents."

By Tom Renner, The Daily Fairfield

FAIRFIELD, Conn. – Fairfield Prep senior Mike Matera scored just eight points in Wednesday’s 62-53 victory over Westhill High in the second round of the Class LL boys basketball tournament. His impact on the defensive end, however, was huge.

Matera hounded Westhill’s Tony Dobbinson, forcing the Vikings’ playmaker to rush shots and give up the ball as well as totally disrupting Westhill’s rhythm. Terry Tarpey scored 26 points to lead the sixth-seeded Jesuits (21-2), who advanced to a quarterfinal game against No. 14 New Britain. No. 11 Westhill finishes the season at 15-8.

“Matera played a huge part in the game,’’ Tarpey said. “We really wanted to contain Dobbinson. We picked it up on the defensive end, and that was the difference.”

The turning point came midway through the third quarter when Westhill’s Chris Walters picked up his third foul with Westhill leading, 33-28. Tarpey converted a three-point play, and Walters went to the bench. and Prep closed the third quarter with an 10-4 run to take the lead for good. With Walters on the bench, Dobbinson was forced to become a playmaker and score for Westhill. Matera wouldn’t let him.

Walters returned for the start of the third quarter, but the momentum had swung in Prep’s favor. The Jesuits went on an 8-0 run to open the quarter and took control.

“We wanted to slow the game down and make them play defense,’’ Prep coach Leo Redgate said. “When we run our stuff the right way, we’re a pretty good team. We ran it a lot better tonight than we did against Norwalk" in a first-round win Tuesday.

The game had special significance for Tarpey, who lives in Stamford and plays in the summer against many of the Westhill players. “It was a little personal,’’ he said. “We really wanted to win this game. They were saying stuff to try to get into my head. It’s nothing I haven’t heard before.”

Tim Butala added 13 points as Prep is just two wins away from reaching the state championship game for the second straight year. “We didn’t want to lose this game,’’ Tarpey said. “We didn’t want to go out as seniors on our home floor. We want to keep playing.”

by Tom Renner, The Daily Fairfield

FAIRFIELD, Conn. – Fairfield Prep’s Terry Tarpey garners a lot of attention, and deservedly so, for his offensive prowess. But in Tuesday’s Class LL first-round game against Norwalk High, the senior turned the game irrevocably in the Jesuits’ favor with his defensive play.

Prep led by 17 points in the third quarter on two occasions before Norwalk mounted a fourth-period comeback. The Bears tied it with 4:01 left on a three-point play by Roy Kane Jr. Prep missed on the ensuing possession, and Norwalk had a chance to take its first lead since early in the first quarter. Tarpey stole a pass near midcourt and raced in untouched for a monster dunk that put Prep ahead to stay.

“He just brings so much to his team,’’ Prep coach Leo Redgate said of Tarpey. “He can score, but he’s actually when he’s at his best when he’s passing. He’s a quiet leader. That play on defense was the biggest of the game.”

Norwalk had an opportunity to tie it up with four seconds left, but Jabari Dear’s three-pointer from the right wing bounced in and out. Thomas Nolan hit two free throws to ice it.

“The thing I was most disappointed in is we came out and got a big lead in the third quarter, and we let them back in it,’’ Redgate said. “When you have a team down like that you have to put them away. Give Norwalk credit. They’re a good team, and they gave us a lot of problems.”

Prep led 31-28 at halftime but turned up the defensive pressure in the third quarter and led 49-32 after a basket by Tim Butala with 1:30 left. Norwalk came back as the Jesuits made seven fourth-quarter turnovers. Kane and Dear combined for 15 of Norwalk’s 20 fourth-quarter points.

“We got a tough draw,’’ said Redgate, whose team lost in the Class LL championship game last year. “Westhill’s a good team from a good conference. We just have to keep taking them one at a time.”

Butala finished with 11 points for Prep, while Ryan Blake had nine and Mike Matera had seven.