Rog '12 posts 7th at Millrose Games
cadams
Feb 15 2012 9:40 AM
Share to FacebookShare to TwitterShare to LinkedInShare to PinterestShare to EmailPrint this page
Featured on News 12 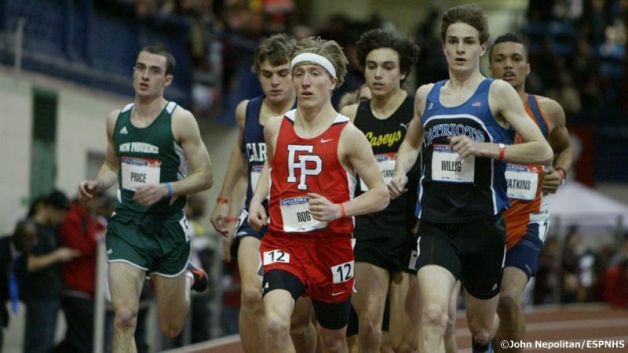 Connor Rog cut short his warm up Saturday night to watch the records fall. The Fairfield Prep senior, the reigning cross-country state champion, was inside the Armory, the Mecca of indoor track-and-field located in upper Manhattan. He was about to compete in the 105th Millrose Games, which for the first time in a century took place outside of Madison Square Garden.

In a moment, Rog would toe the line against the fastest high-school milers in the Northeast. A longer-distance specialist himself, his 4:20 personal best for the mile -- an event considered "mid-distance" in elite running circles -- was the slowest in the 11-man field.

For a minute, that slipped from his mind. He watched the track as Bernard Lagat, the several-time world champion, sprinted home before thousands of roaring fans to break the American record in the 5,000 meters. On Lagat's heels, a collegian smashed the NCAA record by 10 seconds. A teenager from New Jersey then shaved six seconds off the high-school mark.

"Unbelievable," said Rog, shaking out his legs before climbing onto the track. "I just don't want to come in last." He needn't have worried. Rog led the pack of 11 through the first of eight laps. He looped the track five more times in second place, right behind his future teammate at University of Virginia, Mike Marsella, of Rhode Island. When the top milers ratcheted things up over the final quarter-mile, led by Zavon Watkins, of New York, and his furious finishing speed, Rog hung on to cross the finish line in 4:19.66, a new personal best. Seventh place.

"The Millrose Mile is the most prestigious high-school mile you can run in," he said, catching his breath and seeming content after the race. "I can't believe I was in it. I mean, it's just an honor." He added: "At least I didn't come in last place."