Robotics Team Succeeds in Challenge
cadams
Apr 4 2011 3:45 PM
Share to FacebookShare to TwitterShare to LinkedInShare to PinterestShare to EmailPrint this page 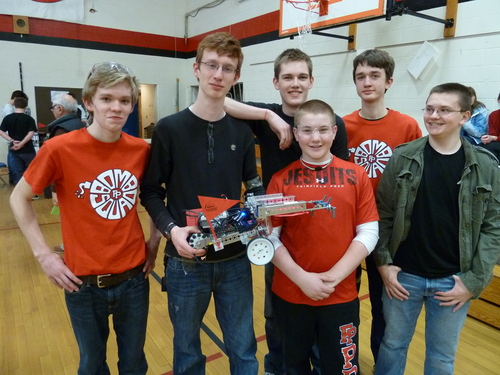 On March 12, 2011, at 5:00 AM, the representative team of aspiring scientists and engineers of Fairfield Prep began the drive to New Hampshire to compete in the F.I.R.S.T. Robotics Competition. The F.I.R.S.T Tech Challenge is the brainchild of Dean Kamen, inventor of the Segway and sponsor of the competition. For the past 4 months, Fairfield Prep’s Robotics Club, under the guidance of Mrs. Deirdre Cannan, built and perfected a small robot that competed against other robots to move and collect batons for points. The Prep team was one of over 1,000 teams vying for a spot in the World Championship in St. Louis, Missouri.

“This is the first year we have competed, but I think we would all agree that our team has worked tirelessly to make Fairfield Prep proud.” - Adam Kee '12

The Prep squad beat several other teams through their hard work, strong effort, and support from other experienced teams. The “JesuiBots,” as they call themselves, are already brainstorming plans for new and improved designs in order to compete in the 2012 competition.