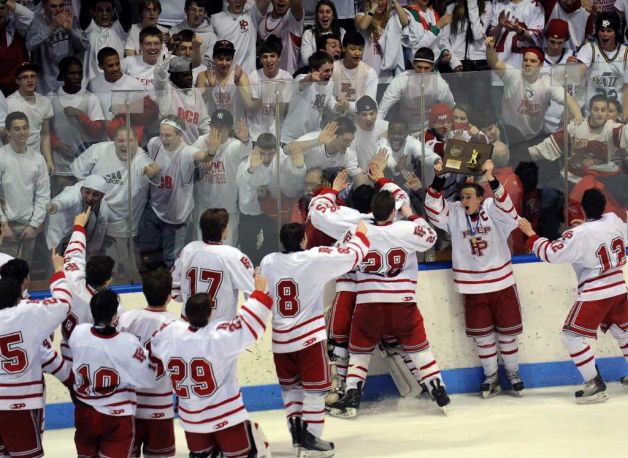 The second-seeded Jesuits stormed out of the gate with three first-period goals en route to a 5-0 rout over No. 4 St. Joseph on Saturday afternoon in the Division I state hockey final at Ingalls Rink.

"We played as well as we can play today," Prep coach Matt Sather said. "I don't think there is a whole lot in that game not to be happy about."

Senior Bryan Puffer scored twice and added an assist, David White added two assists and David Griffin added a goal and an assist as Prep took home its first state title since 2008. The Jesuits have won five Division I titles in the last eight years. It was also their 13th Division I crown and 14th overall.

"You watch them do exactly what you want them to do and realize the impact this has on all of them," Sather said. "It's a humbling experience."

St. Joseph goalie Zach Carrano stopped 41 shots as the Cadets fell in the state final for the second year in a row. St. Joseph lost to Amity 7-5 in the Division II final in 2010.

"We knew we had to play our best game to be competitive, and we fell a little short of it," St. Joseph coach Marty Crouse said. "I'm proud of our kids to get here."

Prep jumped early, tallying twice in the first 3:22 of the game. Junior Connor Peterson put the Jesuits up at 2:14 of the first with a perfect redirection of a point shot from defenseman Kevin Brown.

"It was absolutely huge," Puffer said of the Jesuits' start. "We worked on getting an early lead and burying them early."

Senior Don Carnicky scored just 1:08 later on a rush that beat Carrano over the glove to put Prep up 2-0.

"We've had struggles with our starts," Sather said. "This last week we solved it."

Then Prep's line of Puffer, White and Griffin took over. Puffer tallied the next two goals, the first of which beat Carrano on a shot over the shoulder, which made the score 3-0. Puffer's second goal came off a rebound of a shot by White to put Prep up 4-0.

"We've been really clicking all year," Puffer said. "The 2-on-1 was pretty easy."

Prep goalie John Galiani stopped 25 shots, including three breakaways, two of which came at the expense of Pat Corcoran. Conor Crouse was stopped on one in the second period as well, with the score 3-0.

"There's really only one word: unbelievable," Puffer said of Galiani. "All year."

Galiani's play impressed Crouse, who thought his team could get back in the game with a goal.

"Their kid came up big," he said. "We had several good chances there, and I thought for sure the puck was going to go in, and we just didn't get it."

For the Fairfield Prep seniors, without a title for three years, getting to the top of the mountain is the perfect cap to their careers.

"I can't describe it," Galiani said. "It's the best feeling in the world."