Ryan Brennan: A remarkably full life that ended too soon 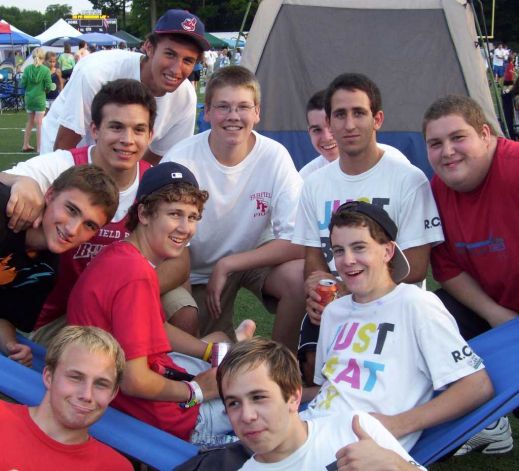 Ryan Brennan had a gift.

The Fairfield College Preparatory School senior had a knack for drawing people to him -- by and large, on his own volition. His schoolmate, Nick Piro of Norwalk, remembers the first day of his freshman year in theology class when Ryan sat next to him and simply asked, "What's your name?" That one question was the beginning of their friendship.

But his "family" was far larger than that, and extended to Fairfield Prep, which rallied around Ryan and the Brennans from the moment he was diagnosed, and to the community at large. Sean had known Ryan since they were in kindergarten at St. Thomas School, but became his friend in second grade. "We became fast friends," Sean says with a smile. He adds, though, they sometimes wound up getting into arguments, but always made up and all was forgiven so they could go on to their next adventure.

Among those adventures were trips to Disney World, the Bahamas and Vermont -- sometimes sightseeing, sometimes just hanging out, sometimes snowboarding -- a passion of Ryan's and his friends. Skateboarding at the park at Jennings Beach, too, was a favorite pastime. One of Sean's fondest memories is the time he, Ryan and Ryan's father went on a one-week "roller coaster road trip" in a rented RV the summer after sixth grade. "We went to six or seven in a week," he says, including Cedar Point in Ohio, which is considered the roller coaster capital of the world. "Ryan and I loved roller coasters. He was a nut about them. He would spend like almost an hour a day watching videos of roller coasters," says Sean, who gave one of the eulogies at the funeral Mass on March 4 at St. Thomas Aquinas Church, attended by hundreds of mourners.

Nick says that Ryan was his "first legit friend at Prep. I was pretty shy freshman year because I didn't know anybody, except a few kids from Norwalk. He just brought me into a little group of friends that he knew." Shyness was not part of Ryan's personality. "He didn't know the meaning of the word," says Sean.

And Phil has a similar story. He and another buddy were among Ryan's first friends in freshman year. "Ryan came up to me in the hallway, and before I even knew him, he was like, 'Yeah, I hear you are staying over at my house tonight.' 'I guess I am.' I was friends with him since then ... He gave us so much hospitality at his house. It was always the place we could go."

Ryan's interests were vast. One of his obsessions was music, all kinds of music, but Bob Marley was at the top of his list. At the funeral Mass, the recessional hymn was Marley's "One Love," Ryan's favorite song. "The song was his ring tone on his phone," Sean says. Phil adds, "He got mad at his brother when he made it his ring tone, too." Nick remembers being at Universal Studios in Orlando with Ryan when they spotted Bob Marley's A Tribute to Freedom restaurant. "He loved the environment," says Nick. "It was either that or Emeril's."

"He was always singing," Nick adds, even when he was weak from his cancer treatment, and he knew the lyrics to all the songs.

For Spanish teacher Melissa Laguzza, she too was taken by Ryan's people skills, which were "phenomenal ... he could get the boys to share." And how he did that, she says, was with his infamous storytelling. Sometimes his stories would go on and on, and once in a while have no point, but he kept his audience in rapt attention. Ryan was "a kid who constantly glowed," she says. "A lot of people lost someone amazing. His life was cut way too short," she says. When she recounts his fight against cancer and how he conducted himself, she says, "It takes a strong person to deal with what he dealt with. And he did it with grace."
She pauses a moment, looking for a way to sum up her connection to Ryan and Ryan's connection to others. With a smile, she says, "He reminded me of why I came into this profession."

The affection Ryan had for his friends and family was returned when he was diagnosed with cancer, underwent treatment and was hospitalized various times. "Through everything," says Sean, "he continued with his positive attitude and did not let cancer change that."

The outpouring of support even astonished those at Sloan-Kettering. The staff at the cancer center told his family that "they had never seen so many visitors ... He never wanted to be alone," Sean says. And Nick says the support helped him through some tough times. "His face would light up when visitors came by. Even if you were there for 20 minutes, it would make his day."

Elliott Gualtiere, the director of campus ministry at Prep, helped organize two blood drives in 2009 and 2010 and went to Sloan-Kettering to donate it, transporting the donors to the cancer center, then visiting Ryan.

Gualtiere, a cancer survivor, is among those who found inspiration and strength from Ryan's fight. When Gualtiere was diagnosed with thyroid cancer last year, Ryan -- who he called an "eternal optimist"-- helped him to put it into perspective. Ryan's battle with cancer, he says, didn't change who he was. "It highlighted him even more, what type of person he was. He made other people feel better about themselves. And in some strange way, he was able to touch more people because of this." To help the Prep community work through its grief, "we turn to our faith," says the Rev. Larry Ryan, S.J., the Prep chaplain who concelebrated the funeral Mass and was the homilist. The Masses of healing and hope, he says, throughout the two years were well attended by students, parents and his family. "It was a wonderful time for his parents, his siblings, his adult friends to come in contact with so many of Ryan's friends here at the school in worship and prayer and love."

He adds, "For me, one of the most extraordinary things about Ryan was that no matter what level of pain or distraction he had with his illness, when you would come, again it was that whole nature of him to put himself out to the people who were around him, that he really felt it his responsibility to make people around him happy, even in those difficult times."

In addition, the school gathered donations for Sloan-Kettering's Children's Joy Fund through weekly collections. The funds raised helped to make the children and their families feel good, says Gualtiere, by purchasing video games, movies or snacks.

Ryan inspired Sean to start collecting and donating beanies and baseball caps to pediatric patients at Sloan-Kettering and Bridgeport and Norwalk hospitals as part of his Eagle Scout project. The collection started when Ryan was given beanies to wear before his chemotherapy started. The hats, says Sean, make the pediatric patients "feel like normal kids" after they start losing their hair.

Their solidarity with Ryan even went so far as to have their heads shaved, through participation in the St. Baldrick's Foundation. "For a two-year stretch, the only time I got my hair cut was when I was shaving my head," Sean says with a laugh.

One of the largest support efforts, in addition to a Facebook page, is "Just Beat It" -- a rallying cry of Ryan's that was turned into a team of the same name for Relay for Life. A cousin and brother-in-law of Ryan's designed T-shirts, bracelets and banners, all displaying a yellow ribbon and the words "Just Beat It." The banners hung outside the Brennan home as well as at Prep. The T-shirts were sold to kids at school and around town with the money raised going to Sloan-Kettering. And Ryan was named the honorary chairman of this year's Fairfield Relay, which takes place June 4 at Fairfield Ludlowe High School.

He gave a speech at the kickoff about three weeks ago. Relay for Life celebrates the lives of people who have fought cancer and remember those who have died. At the overnight event, at least one team member has to be on the track at all times. The money raised goes to the American Cancer Society.

Additionally, the Ryan Charles Brennan Memorial Scholarship was established by the family. Donations may be sent to Fairfield College Preparatory School, 1073 North Benson Road, Fairfield CT 06824. The Fairfield Prep Fathers Club already has made a significant commitment to the scholarship, according to Colleen Adams, director of communications. "We think it is going to be a very nice tribute to his memory and will be a permanent scholarship at Fairfield Prep."