Graduation inspires Class of 2010
cadams
Jun 7 2010 1:38 PM
Share to FacebookShare to TwitterShare to LinkedInShare to PinterestShare to EmailPrint this page 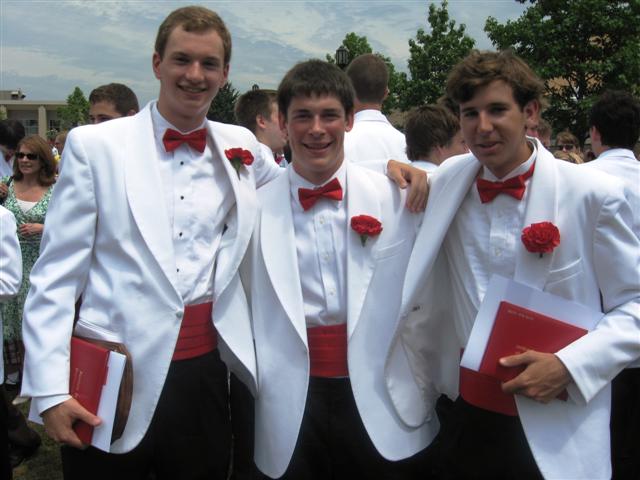 John joins his father, Peter, a member of the Class of 1973, and uncle, John, a member of the Class of 1964, as well as his four cousins, including social studies teacher Kevin Altieri, as Fairfield Prep alumni. John plans to study business at Loyola Marymount University in Los Angeles this fall. "We've been involved with Prep for about 50 years," said John Altieri Sr., the graduate's uncle. Altieri explained that a member of Fairfield Prep's inaugural graduating class, the late Hal Mullen, had led him on his first tour of the Prep campus in 1959. "It's a great school," he said.

Delivering the keynote address, Sister Joan Magnetti, the executive director of the Inner City Bridgeport Schools for the Roman Catholic Diocese of Bridgeport, encouraged the graduates to continue to cultivate "enthusiasm," which, she told them, is defined as "God within." "There is no room for cynicism and nay saying," Magnetti noted.

She also expressed a hope that the graduates continue to live by the credo, "Man for Others," espoused by St. Ignatius of Loyola, the Jesuits' founder. "It's not just about going to work in a soup kitchen, although that is an honorable thing to do," Magnetti explained. "You have to figure out why there is a soup kitchen only ten minutes away from here and what you are you going to do about that."

In the Prep tradition, all of the graduates wore a white tuxedo jacket, black dress pants and red bow tie. Brendan R. Bercik was chosen by his 2010 classmates to deliver the Farewell Address to the ceremony. Peppering his remarks with references to Prep teachers, Bercik discussed the need to take time to reflect on life's experiences as they occur. "As the Jesuits will tell you, reflection is essential," Bercik said. He expressed appreciation to the school's faculty and administrators and to all of the parents, whom he describes as "our primary educators."

"Class of 2010, thank you for the support that you've always given to me and to each other," Bercik continued. "We've formed a brotherhood here. We've learned the true value of friendship."

In addition to presenting diplomas to the graduates, Fairfield Prep president, Rev. John J. Hanwell, honored members of the school's Class of 1960. Celebrating their 50th Reunion, several alumni were present to receive "Golden Diplomas" on Sunday. Before they were recognized onstage, though, Hanwell entertained the audience with anecdotes about what life was like at the start of the 1960s.

During his "trip down memory lane," Hanwell reminded those present that it was in 1960 that John F. Kennedy announced his decision to seek the Democratic presidential nomination and subsequently was elected the nation's Roman Catholic president. Hanwell also described the turbulence that ignited as civil-rights movement got under way. However, it was when he noted that Bobby Darin's popular song, "Mack the Knife," topped the charts as Record of the Year, to everyone's delight Hanwell couldn't resist belting a few bars of the song into the microphone.

The audience gasped, though, when Hanwell said that in 1960 Fairfield Prep's tuition was only $315. Acknowledging that much has, indeed, changed -- "Blackboards have given way to white boards, and `passing notes' to texting and Tweeting" -- Hanwell concluded by saying, "Prep students still enjoy the same fun, same academic spirit and same friendships as back then."