Golf Team: SCC Co-Champs!
n/a
Jun 1 2010 10:21 AM
Share to FacebookShare to TwitterShare to LinkedInShare to PinterestShare to EmailPrint this page
Prep and Cheshire share title!

After capturing the Quinnipiac Division with a perfect 6-0 division record, the Prep team earned a share of the SCC Championship at the SCC Tournament. 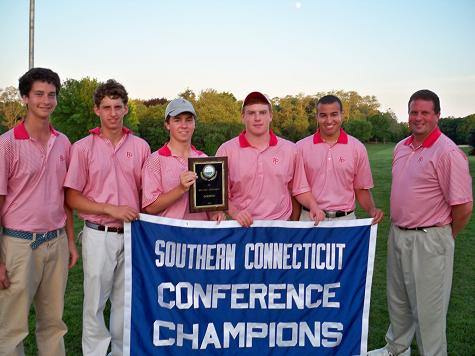 Conor McGovern was co-medalist for the championship with a score of 75. McGovern, John Basile and Matt Mastronardi were named to the All-SCC Team.

Led by Conor McGovern's 76, Fairfield Prep finished 4th at the Division 1 State Tournament on June 7th.  Pat King carded a 79, followed by Matt Mastronardi (81) and Michael Heard (83).  It was the second consecutive fourth-place finish for Prep.

On the strength of his performance during the regular season and at the Division 1 State Championship, Conor McGovern has been named to the Division 1 All-State Golf team.  McGovern, a junior, fired a 5 over par round of 76 and finished in a tie for eighth place in the state championship round, capping a season in which he was also named to the All-SCC team.