Rodriguez '10 is Gates Scholar
cadams
May 14 2010 10:29 AM
Share to FacebookShare to TwitterShare to LinkedInShare to PinterestShare to EmailPrint this page
Wins national college scholarship 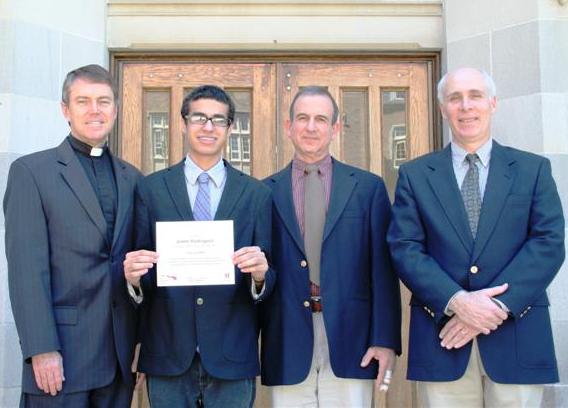 Jaime Rodriguez ’10 has been chosen as a Gates Millennium Scholar (GMS). The Gates Millennium Scholars Program is the nation’s largest minority scholarship program and is funded by a $1.6 billion grant from the Bill & Melinda Gates Foundation. Jaime is among 1000 recipients nationwide. GMS scholarships are awarded to undergraduate students of color across the country who demonstrate academic excellence and strong leadership skills. Scholarships assist students in meeting the cost of attendance at the college or university of their choice. GMS scholars who choose to pursue graduate studies in the areas of computer science, education, engineering, library science, mathematics, public health and science are eligible to receive continued funding. The program also provides leadership development opportunities to ensure that scholars graduate prepared to become strong leaders in their professions and in their communities. Jaime plans to attend Fordham University and pursue a pre-med major, with the ultimate goal of becoming a medical doctor.

Jaime is a member of Fairfield Prep’s SEED (Students for Educational Excellence through Diversity) program through which he received the support necessary to succeed and thrive at Fairfield Prep. He attributes the Gates Scholarship to the educational and personal growth opportunities he has received at Fairfield Prep. Jaime is a member of Prep’s ASPIRA (Hispanic Club) and African-American Cultural Club. He is one of the founders of Prep’s Diversity Club and has been a member of the Southern Connecticut Conference’s Diversity Dream Team. He has been a volunteer at Prep’s SEED Academic Enrichment summer camp, at the Upward Bound program at Fairfield University, and is one of the editors of Prep’s yearbook, Hearthstone. Jaime lives with his mother in Bridgeport, CT.