LAX beats Delbarton 10-2
cadams
Apr 20 2010 3:55 PM
Share to FacebookShare to TwitterShare to LinkedInShare to PinterestShare to EmailPrint this page

At the "Checking for Cancer Lacrosse Invitational" Saturday at the Haverford school, the Jesuits trounced Delbarton of New Jersey 10-2. The team played in honor of Ryan Brennan '10, who is currently undergoing cancer treatment. Click on photo to view Lax.com video highlights. 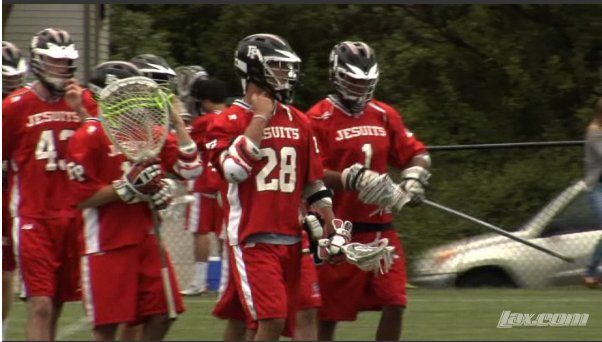 Prep Head Coach Chris Smalkais was pleased to be involved in "Checking for Cancer." The event was sponsored by Nike and was to promote awareness for detection, treatment and prevention of the Testicular, Colorectal and Prostate cancers. "We were asked to participate in this," he said. "We felt honored to be included in this opportunity."

Twelve teams from Connecticut to Maryland showed up for the event with fellow Connecticut squad, Darien, also participating. This was the second year of the event and Smalkais said he'd like to be a part of it again. "We're excited to be here, it's a great day," Smalkais said.

Both sides are familiar with each other, despite being from different states. "Coach Ruebling's team at Delbarton has become a friend, a confidante and a rival in the game of lacrosse," Smalkais said. "We've played these guys for several years." The Jesuits and Green Wave played each other in hockey in the winter, with Delbarton winning 10-2. Prep returned the favor in lacrosse by the same score.

"It was pretty fun to come out and play them again," defenseman Alex Matarazzo said. "We played them in hockey, it felt good to beat them." The Jesuits lost to Delbarton 11-6 last year."To beat them 10-2 is a huge thrill," attacker Brendan Rotanz said.

Smalkais understands the value of traveling around the Northeast to take on the best high school lacrosse has to offer. "We want to try to play the best possible schedule that we can," he said. "The boys that come to Fairfield Prep that participate in lacrosse here want to play some of the top teams in the country."

The Prep defense got involved in some of the offense as David White registered an assist. Matarazzo also had offensive rush that resulted in a near goal. "I saw an opening so I just figured I'd go for it," Matarazzo said. If Prep's defense gets involved in the offense, it could signal a lot of trouble for opponents. The Jesuits have outscored opponents 50-21 in five games thus far this season.

"We're playing with a high lacrosse IQ," Smalkais said. "We are constantly talking about situations which can help us offensively and defensively."

Prep enjoyed the nearly four hour trip to Haverford, Pa. "We had a great bus ride, we watched `Dumb and Dumber'," Rotanz said. "It was a lot of fun coming down here."