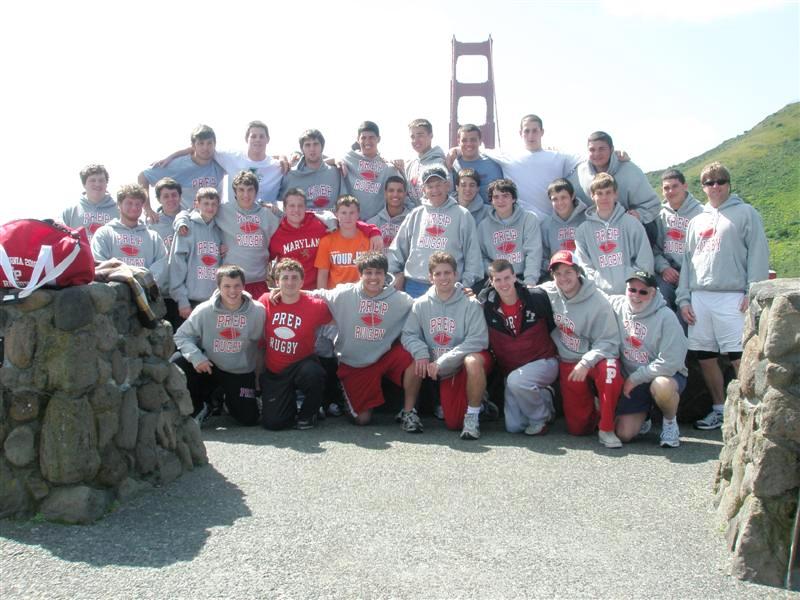 During the spring recess, 26 members of the Prep Rugby team flew to San Francisco for a week of rugby and touring. Their first day in San Francisco was highlighted by an alumni gathering at the Sheraton Fisherman’s Wharf where members of the current team met area alumni, among them former Prep Rugger Chris Szecf '98 and his fiancée.

On Sunday, the team traveled to Santa Rosa and a match against Elsie Allen High School. Led by Captains Mat Bennedetto '10 and Matt Leonard '10 the team garnered a 31 – 17 win in a driving rain lashed by 40 MPH winds.

Monday was a day to recuperate. After a light morning workout we took a brief bus tour and lunched in Chinatown before touring the redwoods of Muir Woods. The boys finished the day off with a team dinner at Outback Steak House where they celebrated their first tour win and Coach Decker’s birthday.

The following day saw the team off to Sacramento and a stop at the state capitol and visit to Old Sacramento prior to our match against defending national high school champion Jesuit High School. Jesuit of Sacramento opened up a commanding lead in the first half (42-0) before the Prepster’s put their game in order and scored 26 points in the second half, finally losing 54 – 26 to the number one ranked Marauders of Jesuit.

On Wednesday the team started with a run across the Golden Gate Bridge and a visit to Sausalito for lunch and sightseeing before heading to Berkley for an opportunity to sit in on the Cal-Berkley Rugby training session as they prepared for this year's national tournament. Coach Jack Clark of the 24 time national champion Cal Bears met with the team to go over his philosophy on rugby, share some tips and answer questions. After the training session team members met with Kyle Caravelli '08 now playing for Cal to talk over his experiences at Cal both on and off the rugby pitch before he had to leave to prepare for his trip to Atlanta for the national tournament.

Thursday started off with a cable car tour of the city as the team boarded a car at Bay and Beach to travel into downtown San Francisco. After an hour in the Union Square area they re-boarded on the Hyde–Powell line to climb back over the hills of the city, past Lombard Street, the “crookedest” street in the world, before preparing for our final match against the San Francisco Golden Gate Rugby Club U-19 team.

A short drive from the city put us on Treasure Island, home of the San Francisco Golden Gate rugby club. The match pitted the Prep 15 against an all-star side of players representing three of San Francisco’s Catholic high schools. After falling behind 12 - 0 the Prepster’s rallied at the end of the first half with 2 scores in the last 5 minutes and sent the match into the second half tied at 12 all. In a tough second half against a larger and tough opponent the Prep team roared to life scoring 26 more points against 10 for Golden Gate winning 38 -22. The 2 and 1 tour record against three tough and experienced sides led the team to quip that it was an “east coast overdose” for California rugby.

The last day of the trip had the team tour Alcatraz then return for a final team dinner at Cioppino’s on Fisherman’s Wharf, where the team celebrated the birthdays of Will Catchpole '11, Rusty Gough '12, Dan O’Brien '10 and Kyle Piscioniere '11 before our return flight to New York and home.