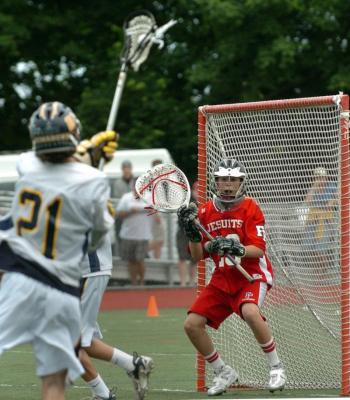 NORWALK -- The day after Fairfield Prep's thrilling Division L lacrosse semifinal win over Ridgefield, the state's top-rated team, the Jesuits could not stop talking about their biggest victory of the year. Senior Tucker Shanley wanted to make sure his teammates knew there could be no letdown.

"After stretching, I brought everyone together and said, 'guys Thursday was awesome, but it's over and we can't think about Ridgefield any more,'" Shanley said. "We've got a new opponent and if we don't focus on them, the Ridgefield win will mean nothing." With its focus squarely on Simsbury, Prep jumped out to a 9-2 lead and coasted to its fourth consecutive Division L championship 15-3 Saturday at McMahon.

Chase Bailey scored four first-period goals and Griff McGoldrick added three as the Jesuits (17-6) dominated every phase of the game from start to finish. "We just wanted to stomp on them and suffocate them right from the beginning," Bailey said. "We didn't want a close game. I don't know if we could take another thriller like the Ridgefield game."

Thanks to the faceoff prowess of Michael Carey and Darric White, Prep controlled possession for almost the entire first period, getting the ball down low to Bailey and McGoldrick, where they were unstoppable. With the score 7-2 late in the first, Brendan Baldwin scored with 49 seconds left and Peter Gruppo whipped in a shot from the wing with three-tenths of a second left to further demoralize the Trojans, a team that had beaten Prep in the regular season.

"We had a game plan, but when you get down so many goals so early you have to throw it away and change things up," Simsbury coach Dan Corcoran said. "We had to rush everything and take quicker shots. We had to try something different and whether you lose by one or 12 it doesn't matter."

Prep goalie Will Lomas (seven saves) settled in after allowing two long first-period goals and blanked the Trojans until he was substituted for midway through the fourth period. After shutting down Ridgefield's highly-regarded Matt White Thursday, hard-working Harley Brown was back at it on Saturday, keeping Simsbury's top threat Paul Gallagher off the scoresheet with a relentless defensive effort.

The Jesuits didn't score in the second period, but added four more in the third period and two in the fourth to finish off their convincing victory and touch off their fourth title celebration. Bailey finished with five goals and two assists, while McGoldrick contributed four goals and an assist, Baldwin scored twice, and Shanley, a four-year starter and the only member of the team with all four championship medals, chipped in with a goal and two assists, in addition to making sure his team kept their eyes on the prize.