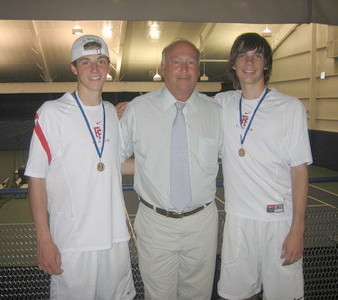 The Prep doubles team of Jason Ottomano and Tom O'Brien won the CIAC Class LL Doubles title with a 7-6(5), 6-4 victory over SCC rival Cheshire, represented by Sean Adams and Greg Mahar. The victory helped Prep to a third place team finish in Class LL behind champion Greenwich and runner-up Staples.

Prep finished the regular season with a 19-0 record and won the SCC league championship with victories over Branford, Cheshrie and Amity to finish with an overall team record of 22-0.

Fairfield Prep extends its appreciation to all of our team members and especially to our seniors for their contributions to the team and to Fairfield Prep.