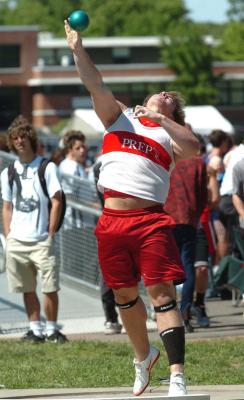 NEW BRITAIN -- Brad Kontra expected his efforts in the shot put to improve as the weather got warmer. But it took an opponent to light a true fire under the Fairfield Prep senior. Kontra beat his personal best in the shot put by more than two feet and won the State Open title Monday afternoon at Willow Brook Park.

"I trained to peak at this point so I expected to go up and up," said Kontra, whose previous high came just last week at the Class LL championship. As well as Kontra has been throwing the shot, he had some extra motivation on this day. Manchester's Jacob DeValve had an impressive 56-foot, 9-inch heave on his second throw of the day, seconds before Kontra entered the ring. "I just got really fired up and threw it 56-10," Kontra said.

That throw was enough to beat DeValve as well as the rest of the field. It also took the sting away from a rather ho-hum effort in the discus by Kontra. "My legs were exhausted from shot put," Kontra said apologetically.