Prep Seniors commit to College Rowing
cadams
May 3 2017 5:55 PM
Share to FacebookShare to TwitterShare to LinkedInShare to PinterestShare to EmailPrint this page 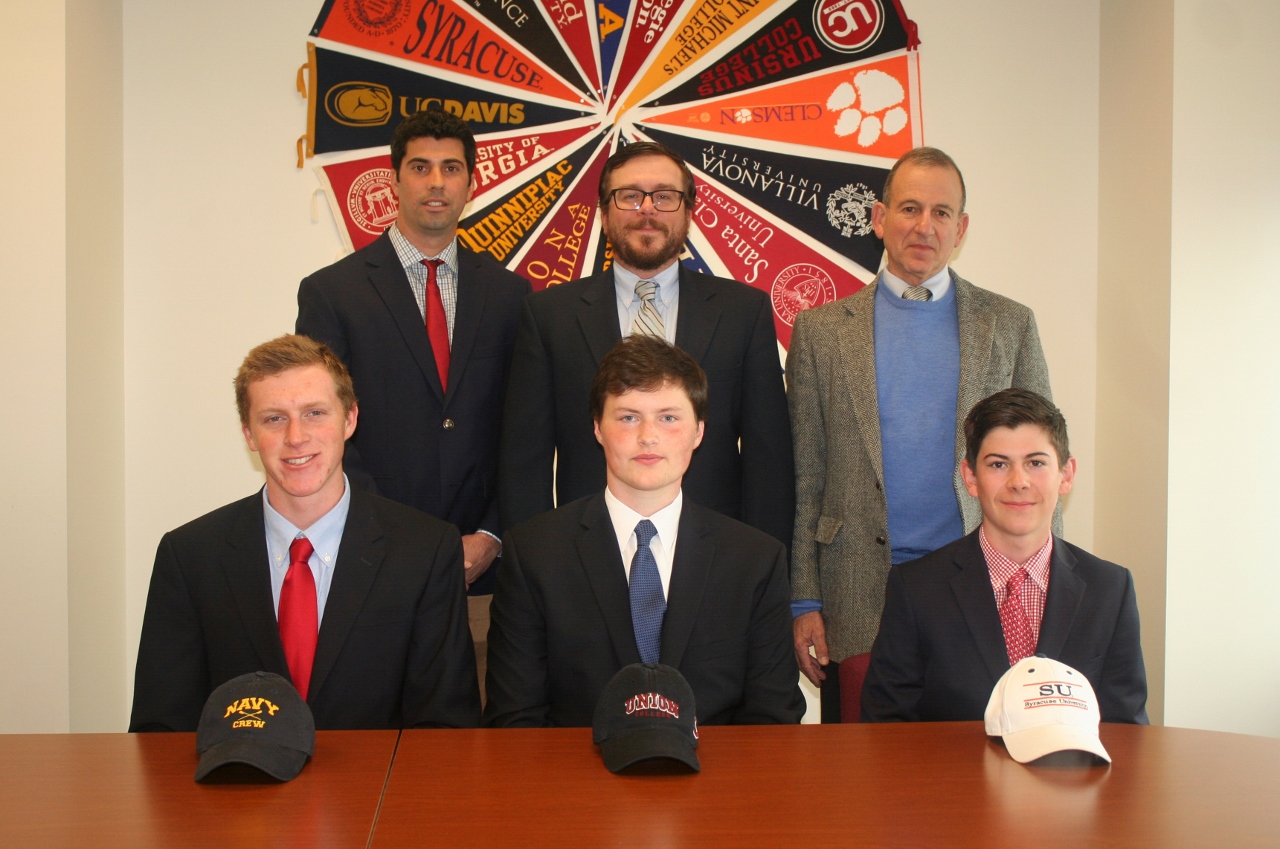 Fairfield Prep proudly announces that by their strong character, academic success, and athletic efforts, seniors M.J. Duffy, Matt Guinee and John Pacelli have earned the opportunity to compete in the sport of Crew while achieving their college degrees.

Fairfield Prep senior, Martin "M.J." Duffy has committed to the United States Naval Academy to row Crew. A two sport student-athlete and Fairfield native, Duffy has medaled twice in the Varsity 1 crew boat in 2015 and 2016 at the NEIRA Championships. He has additionally participated in the Indoor Rowing World Championships for Junior Men and finished 9th in the event. Duffy is also a member of the Varsity Swimming & Diving team where he is an All-State swimmer and anchored the State Open Champion and All-American 200 Medley Relay. Duffy was elected Captain of both the Crew and Swimming & Diving teams in his senior year. In the classroom, he is a Cum Laude honor student, a member of the National Honor Society and was named the 2017 SCC Winter Scholar-Athlete for Prep. When he is out of the water Duffy has embraced the Jesuit mission of service to others. Over the past two summers, he attended a Christian Service trip at an orphanage for handicapped children in Jamaica. On the second trip he served as a student leader. During senior year he has volunteered weekly at the Carolton Chronic and Convalescent Hospital in Fairfield.

Matthew Guinee has committed to Union College to row Crew. Guinee, a Newtown native, was a member of the first school boat to race on international water at the Royal Canadian Henley Regatta. Guinee began his rowing career during his freshman year and quickly rose through the ranks. The past three years he has been a member of the Prep Varsity 2nd boat. His boat finished 3rd at the fall NEIRA championships and 2nd both his junior and senior years. During the junior spring season the 2V boat finished 3rd at NEIRA spring championships. This year the 2V boat currently has a 4-1 record. Guinee has managed Prep's rigorous college preparatory curriculum well. Outside the classroom, he is active in the youth group at St. Rose of Lima Church in Newtown and volunteers at St Joseph's Manor Care and Rehabilitation Center in Trumbull where he assists the elderly.

John Pacelli found the sport of Crew at Fairfield Prep and has advanced well in the position of coxswain. His dedication and growth have led to his commitment to rowing Crew at Syracuse University where he will begin his college career in the fall of 2017. Pacelli, a Fairfield native, has been a member of the Varsity 1 crew boat since his sophomore year, finishing in second place at the NEIRA championships in both 2014 and 2015, and finishing in third place in 2016. He competed in the National Schools Regatta in 2016 as well as in the Canadian Henley. Pacelli captains the Crew team while contributing to Prep’s Basketball program as team manager for the past four years. In the classroom, he has improved academically each year and has achieved Cum Laude honors in senior year. In his community service life, John has supported the efforts of the Cardinal Shehan Center in Bridgeport, assisting with after-school recreational programs, and has contributed to fund raising efforts through the Catwalk for a Cure program.