Duffy & Zentner are SCC Scholar-Athletes
cadams
Mar 13 2017 3:54 PM
Share to FacebookShare to TwitterShare to LinkedInShare to PinterestShare to EmailPrint this page
Recognized for sport leadership and athleticism 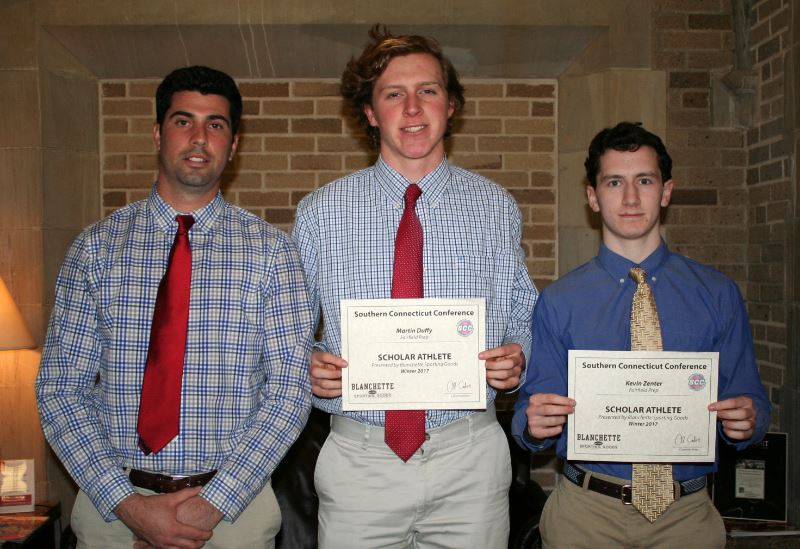 Seniors MJ Duffy (Swimming) and Kevin Zentner (Wrestling) were both recognized for their sport leadership and athleticism, and have been named OrthoNOW/Southern Connecticut Conference Scholar Athletes of the Month. Student athletes who are selected must be a varsity letter winner and have a 3.0/B average while demonstrating leadership qualities such as: being a positive role model; helping teammates overcome adversity; showing a commitment to self-improvement; or putting the needs of the team before themselves.

Fairfield Prep senior Martin (MJ) Duffy has been a model student-athlete at Fairfield Prep. A two sport athlete, MJ has been a top rower with the crew team and one the Prep’s top sprinters in Swimming. Last year in the pool, MJ was ALL-SCC and ALL-State as the anchor of the 200 Medley Relay team. This season he has helped lead the Fairfield Prep Swimming & Diving team to a 13-0 dual meet record and the SCC Championship. MJ’s Leadership is valued by his teammates as evidenced by his selection as a Captain of both Crew and Swimming & Diving in his senior year. In school he is a Cum Laude student and has sung in the choir. MJ also actively embraces the Jesuit mission of service to others. This past summer he served as a Student Leader on his second Christian Service trip to Jamaica working with developmentally delayed children. He has also volunteered at the Wakeman Boys and Girls Club, Operation Hope and teaching swimming with the Special Olympics. MJ has received an appointment to attend the United States Naval Academy next fall where he will be a member of the crew team.

Fairfield Prep senior Kevin Zentner has been named an SCC-Scholar Athlete for the winter athletic season. Zentner, who is a senior captain for the Prep wrestling team, completed a banner year earning his 100th career win and being recognized as an SCC champion and Class LL placer. Zentner then moved on to the State Open to round out the year. Kevin is a determined and diligent athlete and student who extends himself beyond the classroom in working all year round as a wrestling athlete and as an outstanding Math and Science student. Kevin has participated in wrestling camps and summer engineering programs during his Prep years, pursuing his talents with enthusiasm. In the classroom, Kevin is a standout student, taking the highest level course offered in each academic discipline and achieving a 4.0 GPA and Summa Cum Laude honors. He is a member of the National Honor Society as well as a co-President of the Stock Market Club. Kevin is also involved as a peer tutor at Prep and a tutor at the Beardsley Elementary School in Bridgeport.