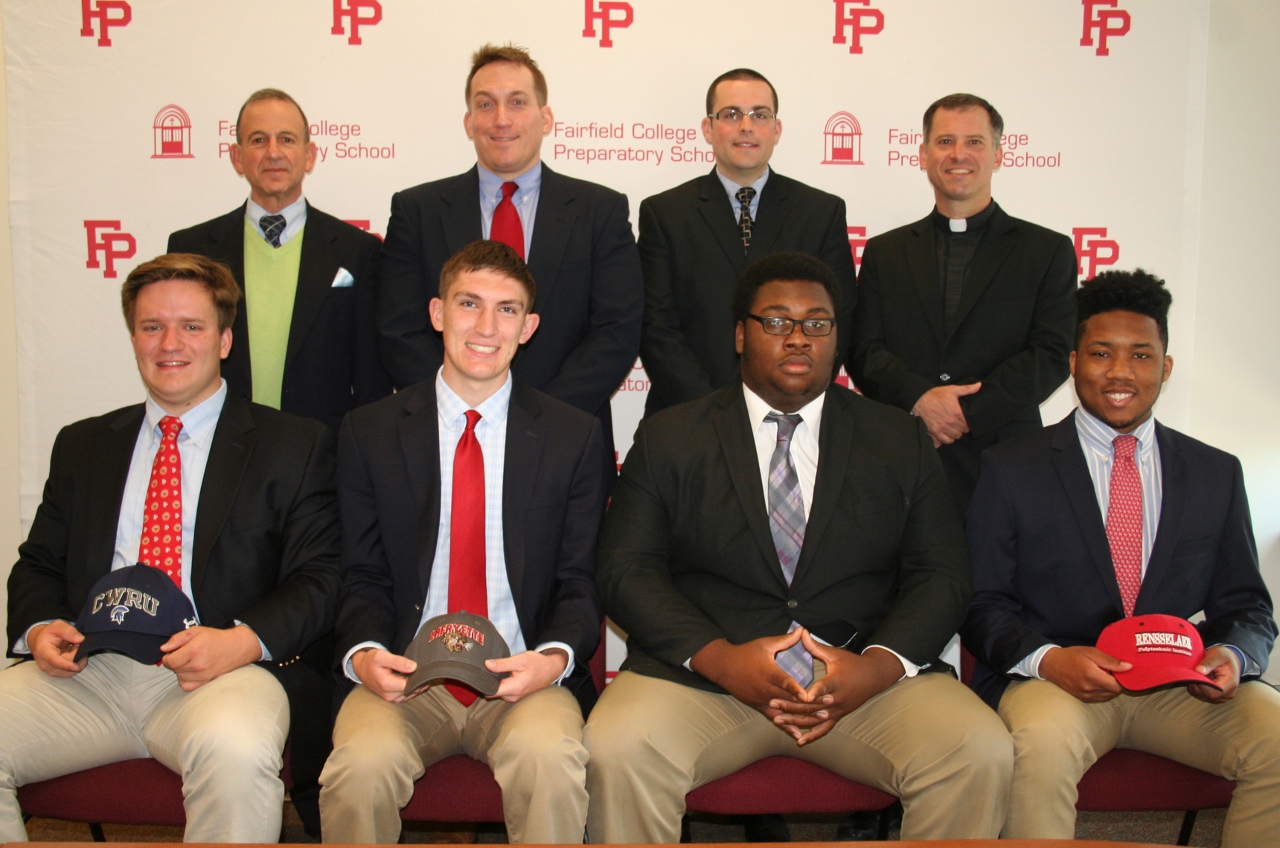 Fairfield Prep is pleased to recognize four scholar athletes from the Class of 2016 who will continue their athletic careers, having committed to play football at the college level. Head Coach Keith Hellstern expressed pride in the talent, growth and motivation of these athletes. Hellstern acknowledged the role of these athletes in guiding the program this year and expressed optimism for continued success for Prep in the upcoming season.

Aedan Ayer is an excellent example of a Fairfield Prep Student-Athlete. For the past two years he has been a starting offensive lineman on the Varsity Football team. His steady presence has helped lead the Jesuits to a 12-9 record over the past two seasons. He is also a member of Prep Gaelic Football team. Aedan is a Cum Laude honor student and a member of the National Honor Society. Outside the playing field and classroom, Aedan is an exemplary citizen and active member of his school and local community. For the past year he has volunteered at the Downtown Evening Soup Kitchen in New Haven. He is an elected class representative in Student Government and also serves on the Senior Class Alumni Giving Committee. An avid Boy Scout, Aedan earned his Eagle Scout Award this past year. He looks forward to continuing his studies and playing football at Case Western Reserve University in Cleveland, Ohio.

Thomas Moore’s outstanding achievements in the classrooms of Fairfield Prep along with his strong and steady contributions to Prep’s Football and Track programs have paved the way for him to continue his intellectual growth and athletic career at Lafayette College. Going beyond the call is a theme in all that Thomas has achieved and engaged in during his Prep years. In addition to service at the Kennedy Center, he took on the challenge of going on Prep’s Global Mission to Ecuador, a one week service immersion. Recognition for his achievements in the classroom include achieving Summa Cum Laude honors for all of his Prep years, entrance into the National Honor Society and his being awarded the Cornell Book Award at Prep’s Academic Awards program in his senior year. For his football accomplishments Thomas is well known for his strong sense of team, consistent effort and focus. As the ultimate teammate, Thomas filled in as quarterback due to injury during his senior season. His accomplishments represent leadership through action as his dedication to excellence on the football field and in the classroom earned Thomas the recognition as National Football Foundation Scholar Athlete Award this year. Thomas will continue his studies and football career at Lafayette College in the fall of 2016.

As a two time letterman and team captain in his senior year Sam Opont-Durogene has certainly stood out in his football career at Fairfield Prep. Along with his progress on the football field Sam has shown steady improvement in his academic life over his Prep years as well. His accomplishments as a student and football athlete now lead Sam to continue that growth as a post graduate student at Trinity-Pawling before moving on to college. In addition to his leadership experiences in the Prep football program Sam has stood out in service to the community, offering his efforts to the Cardinal Shehan Center in Bridgeport where he assists with recreation activities, at Thurgood Marshall School where he has assisted with the after-school program and at Cambridge Manor nursing home. Sam has shown an openness to growth and challenges in his Prep years which will hold him up well in his post graduate experience as he looks to gain added collegiate opportunities as a student athlete.

Consistent hard work and steady progress in the classroom and on the football field have paved the way for Calvin Reed to continue his football and academic careers at Rensselaer Polytechnic Institute beginning in the fall of 2016.  A two year varsity letterman in the Prep program, Calvin was recognized as 1st team all SCC, an all LL Connecticut High School Coaches Association selection and a 2nd team New Haven Register selection. Calvin capped off his career at Prep being recognized as Prep’s defensive MVP for the 2015 season. Calvin’s steady progress in the classroom during his Prep career is a further tribute to his strong work ethic, reflected further in his commitment to the wider community. Calvin traveled to Appalachia with Prep’s Mission group during his sophomore-junior summer and has made a significant contribution to the New Haven Reads program as a volunteer tutor. He has also assisted at the Downtown Evening Soup Kitchen in New Haven. Calvin has distinguished himself well as a young man of character in his Prep years rising well through challenges, fully ready to begin his career at RPI in the fall of 2016.