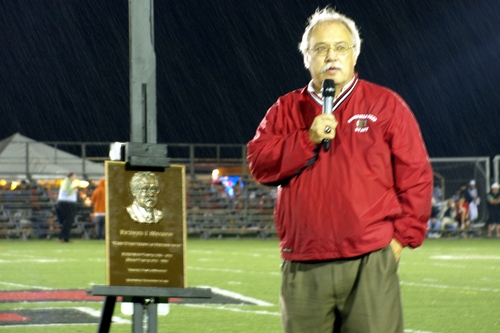 Rich Magdon, who taught and coached football at Fairfield Prep for more than three decades, died Saturday night in a Hackensack, New Jersey hospital after a long illness. He was 66.

Magdon coached at Fairfield Prep for 34 seasons over two stints beginning in 1970. After coaching under Seymour’s Dan Heffernan during the mid-70s, in 1978 Magdon returned to Fairfield Prep where he spent the next 30 years.

He served as an assistant for Earl Lavery and helped the Jesuits win two of the school’s three state championships, both over Greenwich in 1982 (Class L-I) and 1988 (Class LL).

Fairfield Prep was 96-69-2 during Magdon’s tenure, including seven winning seasons and two Class LL semifinal appearances in 1999 and 2006.

While Fairfield Prep didn’t win either of those playoff games, one of Magdon’s greatest victories as a head coach was ending Cheshire’s record 49-game win streak with a 14-6 victory at Alumni Field in 1996.

“Our kids are confident, not cocky. There’s a difference,” Magdon told the Hartford Courant afterward. “They respect the hell out of that team that got off the bus here tonight. But they’re not afraid of anybody.” 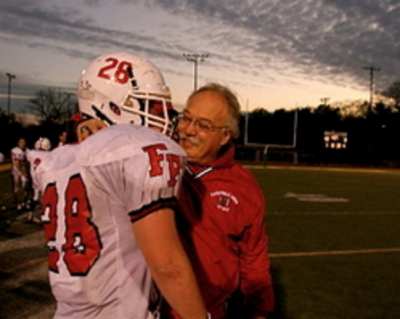 “This is a great loss for Connecticut high school football,” said Ansonia coach Tom Brockett, who had Magdon on his staff for the last two years. “He made such an impact on so many kids, especially at Fairfield Prep. Everybody loved him. He was such a genuine guy who’d give the shirt off his back to anybody. He loved football, loved being around kids and coaching football.”

Tom Shea, who was an assistant under Magdon and eventually took over the football program in 2010, noted that one of Magdon’s best qualities was teaching life lessons to the boys under his charge.

“Football coaches aren’t just about coaching football. It’s about forming young men,” Shea said. “And he had such a positive influence on so many kids in the role of teacher and in the role of an administrator. I know there’s a lot of affection and gratitude from so many people at Fairfield Prep.”

Shea recalled a day when a player came to Magdon to quit the team. “He wasn’t a great player, but Rich was so wonderful in dealing with him,” Shea said. “He said, ‘Be careful because quitting is such a slippery slope. Once you start quitting, it gets easier and easier to keep quitting. So be careful.'”

Magdon resigned from coaching in 2008 and continued his duties as a Fairfield Prep dean, a position from which he retired in 2014. For the 2011 home-opener, Fairfield Prep honored Magdon with a plaque commemorating his service to the school.

“This is a very humbling and rewarding experience,” he said to the crowd. “There’s too many people to thank for this, but the biggest thank you is to Fairfield Prep for giving me the privilege of being associated with this great school and its great football program.

He was tough. But I'll tell you, he was so compassionate with the kids. He could figure out ways to straighten out some of the screwballs that, I'm sure as adults now, they are very appreciative of what he'd done.
-- Tom Shea, former Fairfield Prep head coach and assistant under Magdon

“I thank everyone that has ever played for us. I thank all the coaches that worked for me. I thank the administration for their support and the faculty of their support. And most of all I thank the parents for having the faith and trust for sending their sons here for us to work with.”

He eventually returned to coach as an assistant at Ansonia in 2014 and 2015 while his adopted grandson, Jayme (J.J.) Tuttle, Jr. was a member of the team.

Magdon grew up on Salem St. on the North End of Bridgeport. He attended Notre Dame of Bridgeport and played football for Lou Saccone. He graduated from Fairfield University.

Friends remembered Magdon for his often gruff, no-nonsense attitude and a dry wit for getting his point across. But under that tough-guy exterior was a man brimming with of love and care.

“He could be sharp with the tongue a few times,” Shea said. “He was tough. But I’ll tell you he was so compassionate with the kids. He could figure out ways to straighten out some of the screwballs that, I’m sure as adults now, they are very appreciative of what he’d done.”

“He was never at a loss for words. He said what he stood for,” said Billy Pinto, an assistant at Trumbull who coached under Magdon at Fairfield Prep for seven years and succeeded him as head coach for one season. “It wasn’t the most popular thing to say, but it was the right thing to say.”

Trumbull coach Bob Maffei, who grew up in Fairfield, met Magdon at Fairfield University through his father. The two became friends and served as best man at each other’s wedding. Maffei later coached with Magdon at Fairfield Prep for three years beginning in the late 1970s and recalled going to Magdon’s mother’s house in Bridgeport to bless each other with holy water before games.

“He was funny,” Maffei said. “He had a great sense of humor. He’d tell stories that had you in stitches all the time. And he was a real good coach.”

“He was a character, but he was our character,” McCarthy said. “Those St. Joseph-Fairfield Prep games… It was a horrible rivalry. It was a bitter, bitter rivalry. But I’d like to think we saw through it at the end of the day. We got a long pretty good.”

Magdon suffered a heart attack and was hospitalized a few days before Ansonia’s 48-0 victory over Derby on Sept. 25. Tuttle scored a touchdown in his honor.

Magdon had diabetes, which complicated his recovery, his friends said. He spent the remainder of his life moving from hospitals in Connecticut to New York City and in New Jersey. McCarthy said Magdon seemed to be getting better in February. “He kept telling me, ‘I’ll be back in time for August. I’ll be ready to go,'” McCarthy said. “He was optimistic.”

“The whole ordeal has been so sad,” Shea said. “Rich fought. I know his only thoughts these last few months weren’t for himself. They were all about his grandson whom he’d raised all his life.”

Magdon is predeceased by his wife, Julie, who died in 2013. Funeral arrangements have not been announced.