Donahue named Athletic Director
cadams
May 8 2009 10:15 AM
Share to FacebookShare to TwitterShare to LinkedInShare to PinterestShare to EmailPrint this page
Teacher, alumnus announced as new director 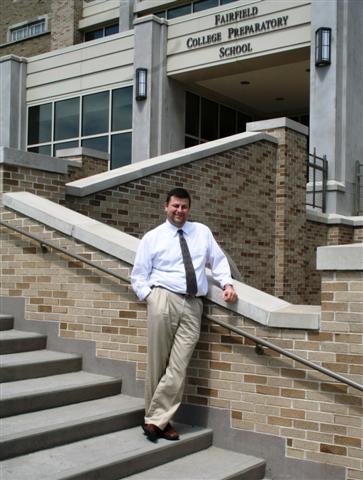 Fairfield Prep has announced the school's new Athletic Director, Steve Donahue, a current Math teacher and alumnus. Steve has taught at Prep for six years, and has served as Head Coach of JV Golf, and Assistant Coach of both Baseball and Hockey. He also played baseball for four years as a Prep student. Steve fills the position of retiring director Bob Harris who built the Prep athletic program over the past 30 years. On being named Athletic Director, Steve responded, "I am honored to be named to the position given the long and distinguished history of athletics at Prep. I have big shoes to fill with Bob Harris retiring and will continue the standard of excellence he has set."

Dr. Robert Perrotta, principal, commented on the selection of Steve for the position: "Steve is a professional with a long standing commitment to Fairfield Prep. He is an alumnus, an athlete, a math teacher, an excellent coach, and an esteemed member of the Prep community. He clearly understands and fully supports the Jesuit identity and the Jesuit mission of the school. With his incredible work ethic combined with his dedication to the education of our students, I have no doubt that he will carry on the excellent tradition established by Bob Harris over his 30 years of service as Athletic Director. We are grateful to Steve for accepting this challenge and look forward to working with him for many years to come."

Fairfield Prep has an athletic tradition rooted in Jesuit, Catholic ideals which emphasize education of the whole student - body, mind and spirit. Donahue reinforced this focus, "The Jesuit mission is something I believe in strongly and will be reflected by all of our coaches and players. I look forward to the challenge of instilling pride in both the athletes and the student body here at Prep; and fielding teams that excel while exhibiting class and good sportsmanship."

Donahue lives with his wife Allison in Oxford.