Campbell and Blees win Rotary "Service Above Self" Scholarships

Campbell and Blees win Rotary "Service Above Self" Scholarships
cadams
Jun 18 2015 3:44 PM
Share to FacebookShare to TwitterShare to LinkedInShare to PinterestShare to EmailPrint this page
Seniors receive scholarships for outstanding commitment to community service 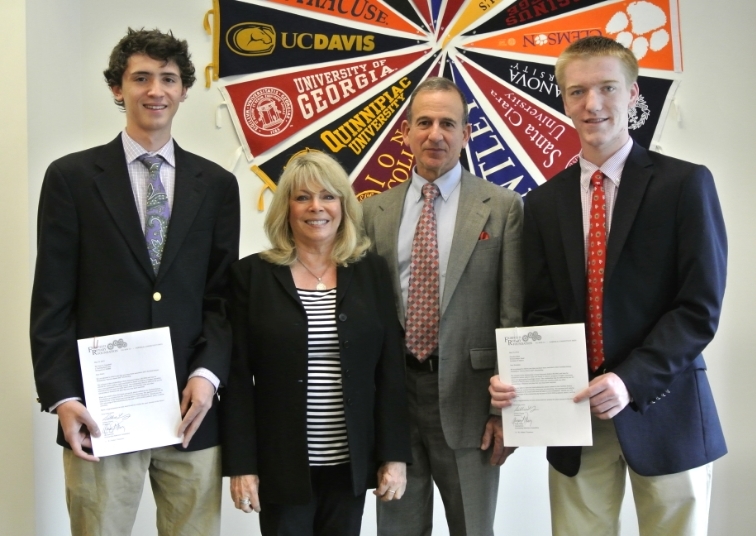 Prep seniors Peter Campbell and Brendan Blees recently received Fairfield Rotary Foundation scholarships, which are awarded to high school seniors who have demonstrated an outstanding commitment to community service and exemplify the Rotary motto "Service Above Self." Scholastic achievement is also considered in the application process. The Fairfield Rotary Club is a member of Rotary International, an organization of business and professional people dedicated to humanitarian service and international understanding.

Peter Campbell has shared his many talents liberally with both the Prep community and the local community during his time at Fairfield Prep. His efforts have earned Peter the Rotary “Service Above Self” Scholarship for this service and for his extraordinary academic achievements. On campus Peter has served as a Peer Tutor, assisting fellow students with their academic success and has served as an Open House host. As President of Prep’s Spanish Honor Society chapter, Peter has organized a number of drives to benefit the needy in the local community. He has also shared his musical talents with KEYS, a local organization dedicated to bringing and teaching music in Bridgeport. Peter is an Eagle Scout whose project benefited Sherwood Island State Park. Additionally he has dedicated his energies to assisting at the Westport Senior Center and Bridgeport Hospital in the Pathology lab. Peter is an excellent student who will continue his studies at Johns Hopkins University beginning in the fall of 2015.

Brendan Blees has been awarded the Fairfield Rotary “Service Above Self” Scholarship by distinguishing himself for both his service to the community and by his scholarship. Brendan has been a standout in the area of service both on the Prep campus and in the surrounding community. On campus Brendan has served as a Peer Tutor, assisting fellow students with their academic success and he took on the extraordinary role as co-director of Prep’s Freshman Retreat this year.  In the community Brendan’s service has qualified him for the Presidential Gold Service Award for the past three years for his numerous roles in local service. Brendan has participated in the Wakeman Boy and Girls Club Keystone Club and McKinley Mentoring program. His tremendous efforts resulted in Brendan being named Wakeman Boy of the Year.  Brendan is a standout in his academic life at Prep and will continue his studies at the University of Michigan beginning in the fall of 2015.