Class of 2015 graduates at Alumni Hall

Class of 2015 graduates at Alumni Hall
cadams
Jun 1 2015 4:38 PM
Share to FacebookShare to TwitterShare to Google+Share to LinkedInShare to PinterestShare to EmailPrint this page
215 students receive diplomas

SEE PHOTO SLIDESHOW. Graduation videos will be uploaded to www.youtube.com/fairfieldprep1. 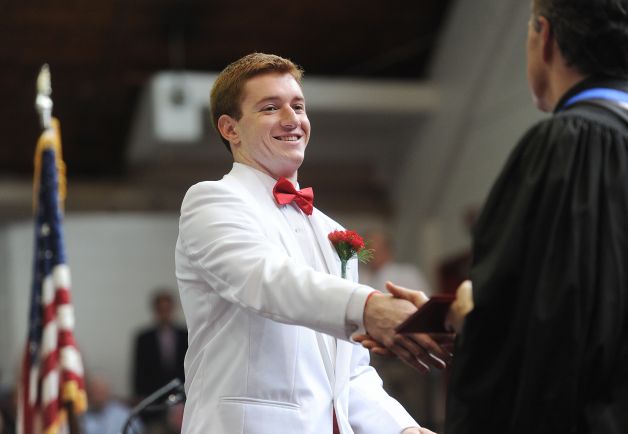 Commencement programs doubled as fans in sweltering Alumni Hall on the campus of Fairfield University where 215 members of the Fairfield College Preparatory School Class of 2015 received their diplomas Sunday -- and a heart-felt send-off into the next chapter of their young lives.

Proud parents dabbed their eyes and graduates dabbed their forehead with white handkerchiefs throughout the nearly 90-minute graduation exercises, the 73rd of the school's history. They heard words of wisdom from graduate Christopher Specht, chosen by his classmates to address the ceremony, and keynote speaker the Rev. Joseph O'Keefe, S.J., director of the Center for Ignatian Spirituality and Professor of Education at Boston College, and the Rev. John Hanwell, S.J., the president of Fairfield Prep, gave his traditional song-filled address to members of the golden Class of 1965.

Taking them on a brief walk down memory lane, Hanwell mentioned some of the highlights during their years at Prep a half-century ago, which coincided with the turbulent 1960s: The civil-rights march in Selma and the Voting Rights Act, Pope Pius VI's visit to the U.S. where he said Mass at Yankee Stadium, the riots in Watts, Calif., and the 13-hour blackout in the Northeast. Hanwell sang smatterings from songs of the era -- the theme of the "Green Acres" television comedy, the Beatles' "Help," Petula Clark's "Downtown," the Supremes" "Stop in the Name of Love," and that year's Grammy Award-winning song, "The Girl from Ipanema," with the audience joining him on the lyric, "Ah."

Noting how the world has changed between the graduating classes in 1965 and 2015, Hanwell mentioned that students have gone from passing notes in class to texting, from the first Catholic president, John F. Kennedy, to the first African-American president, Barack Obama.

Specht told fellow graduates that one of their greatest responsibilities is discernment. He advised them to discern what is important in life and distinguish it from all the noise and distractions in the world. He donned a captain's hat and led his classmates in one final, rousing cheer.

O'Keefe, promising to be brief, particularly because of the uncomfortable heat, delivered to graduates a Top Three list instead of a Top 10: "Charity begins at home but it doesn't end there ... Seeing is believing and believing is seeing ... Be a re-gifter ... I want you to re-gift things that are much more important than objects. I want you to re-gift the blessings you have received here at Prep," he said.

The last graduate to receive his diploma lingered on stage, took out a selfie stick and photographed himself with all his fellow graduates behind him.

Six special awards were bestowed on graduates including the Jesuit Secondary Education Associate Award, which went to Kevin Stone, Jr., 17, of Stamford, who will go to Harvard University, where he plans to play baseball.

Two graduates and a member of the Class of 1965 sported arms in slings at the commencement. Steven DeMoura, 17, of Fairfield, broke his left arm playing soccer in New Hampshire the day before graduation. Patrick Harris, 18, of Fairfield, dislocated his right shoulder Tuesday playing basketball at the Wakeman Boys and Girls Club in town. Cliff Potocky (Class of 1965) of Shelton said he broke his left collar bone on May 21 but "I delayed surgery so I could come here. It's fabulous."

After the commencement, the Gibson family broke out the bubbly to celebrate the occasion on the lawn between Alumni Hall and the Barone Campus Center; not champagne but of the soapy variety. During the ceremonies Nadine Gibson wore on her outfit a mock-up she made of her son Allen Gibson IV in a white cap and gown with a button photograph of his face. Eight other members of the Gibson family carried photographs of Allen, some topped with a red construction paper mortarboard. Other photos were of Allen from infancy to young man.

They were proud of Allen's accomplishment, not just graduating but also fighting through adversity. Allen's aunt Janine Lindsay of Atlanta, said he had a serious health issue at the beginning of junior year for which he had a one-week hospitalization. "It could have affected his heart and his ability to play sports, but he worked with athletic conditioners to train his body and got permission to play," she said.

Allen not only played football and basketball for Fairfield Prep, he was on the state championship basketball team this spring and he plans to play football at Endicott College.

"I'm super excited to go to college," said graduate Nicholas Bakonyi, 17, of Fairfield, who will study chemical engineering at Miami University in Ohio. He was also pleased that his grandmother, Anna Bakonyi, made the trip from Rochester, Mich., to be at the graduation. "I don't see her that much so to have her here means everything to me," he said.