Prep Players win Halo Award!
cadams
Jun 1 2015 2:35 PM
Share to FacebookShare to TwitterShare to LinkedInShare to PinterestShare to EmailPrint this page
Many nominations received! Kokias and Riccio perform number from The Drowsy Chaperone. 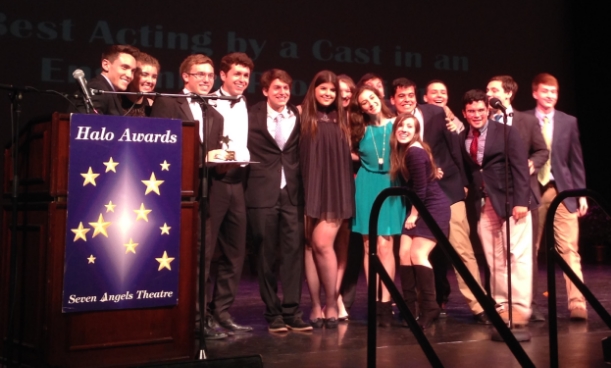 On May 27, the Prep Players attended the Halo Awards at the Palace Theatre in Hartford, and received the award for Best Acting by an Ensemble Cast for The Laramie Project. Fine Arts Chair and Director Megan Hoover commented, "This is the second year that we have won the award in this category, which is a true testament to the way in which the students in this program connect to one another and support each other on stage." The Laramie cast included: Aidan Foley, Al Kelly, Annamarie Fama, Brendan Reed, Devon Valera, Dimitri Kousidis, Elizabeth Martinez, Ivy Tebbetts, Jackson Mendes, Katie Rooney, Kelvin Alvarez, Liam Traynor, Matt Didelot, Michael Kokias, Niko Lignore, Serginho Valcourt and Victor Riccio.

The Prep Players were recognized with several Halo Award nominations this year. Mrs. Hoover praised the players: "Please help me to congratulate the casts of both our musical and our fall play on this incredible accomplishment."

At the awards event, Michael Kokias and Victor Riccio represented the group with a performance of their tap number from The Drowsy Chaperone. Watch Prep You Tube!