Sophomore Retreat builds Brotherhood
cadams
May 21 2015 10:00 AM
Share to FacebookShare to TwitterShare to LinkedInShare to PinterestShare to EmailPrint this page
Creating bonds and trust 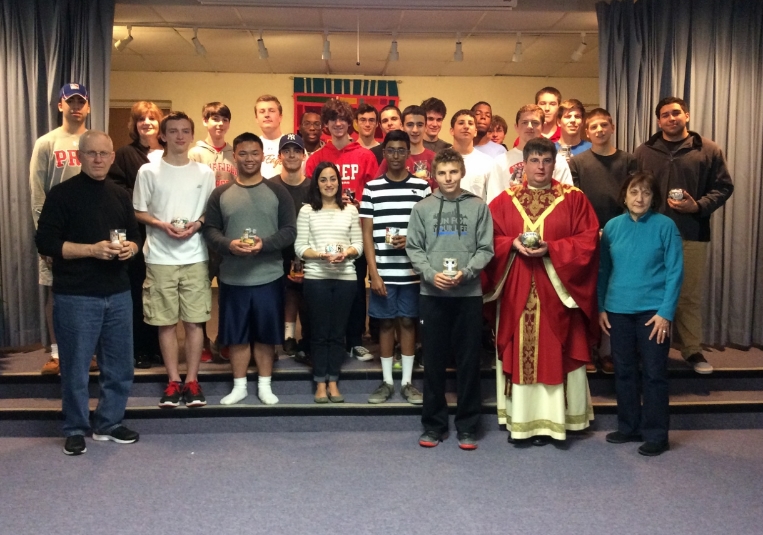 Prep's 7th annual sophomore retreat was held at Wisdom House in Litchfield, CT, April 23-25. Nineteen sophomores were accompanied by nine team members made up of juniors (who participated last year) and select faculty. This group spent the two days of the retreat engaging in group activities, prayer and discussion. A big thank you goes to the junior leaders: John Kenny, Vinny Nguyen, Alex Norton and Austin Prusak. Also thank you to the faculty who gave of their time and energy to make this retreat so successful: Lynne Chesbro, Anna and Charlie Dicenso, Linda Kaye, and Fr. Bret Stockdale, S.J. The following is a reflection of one of the sophomores who attended this year’s retreat.

My friend and I signed up through the encouragement of Campus Ministry. We figured, why not, we miss school, and we both will have a buddy going through the process with us. What I expected was prayer services, experiments, stories, and talks to make us either believe in God, or strengthen our belief in God… but when we started talking openly as a group, I came to find a sense of trust, brotherhood, and confidentiality that I had not experienced with many of my friends, and classmates ever before. The retreat and its leaders provided four main topics for us to talk about in small groups, and in the large group. Each topic could relate to every single person in their own way. Hearing others with similar problems as myself, and hearing problems I've been fortunate to never have makes you appreciate a group of trust and openness. I rarely before the retreat had “real” conversations with my friends. The retreat allowed us to do so. The retreat won't ever seem cool to the people who did not attend, but it is not meant to be cool, it's meant to show us true brotherhood. My classmates and group leaders became brothers to me because they were honest with me; helped me think and work things out; showed support for my decisions, and showed love and compassion which is what we are called to be.