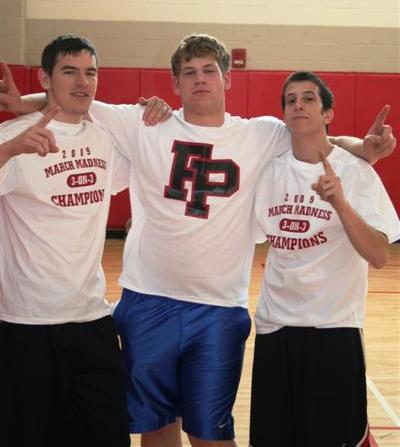 Throughout the months of March and April, over one hundred of our students competed in a 3-on-3 "March Madness" basketball tournament. In total, 33 teams played in this single elimination tournament, which was played using the NCAA bracket format. The #15 seed Wake Forest, comprised of four freshmen, surprised everyone by making it all the way to the Final Four. Mike Matera, Matt McTague, Nick Maffei, and Ben Sullivan won three games before losing in the semi-finals. The favorite throughout the tournament, #1 seed Michigan State, faced off against the #2 seed Davidson in the Championship game on Thursday, April 9th. Michigan State (Jake Van Sant ‘09, Pete Christiani ‘09, Tate Langerman ‘09, and Robby Bier ‘11) defeated Davidson (Vinny Cotto ‘10, Kirk Brodie ‘12, Matt Daley ‘11, and Steve Gulish ‘10) rather easily as Cotto was forced to miss the game.