LAX are SCC Champions!
cadams
May 30 2014 4:19 PM
Share to FacebookShare to TwitterShare to LinkedInShare to PinterestShare to EmailPrint this page 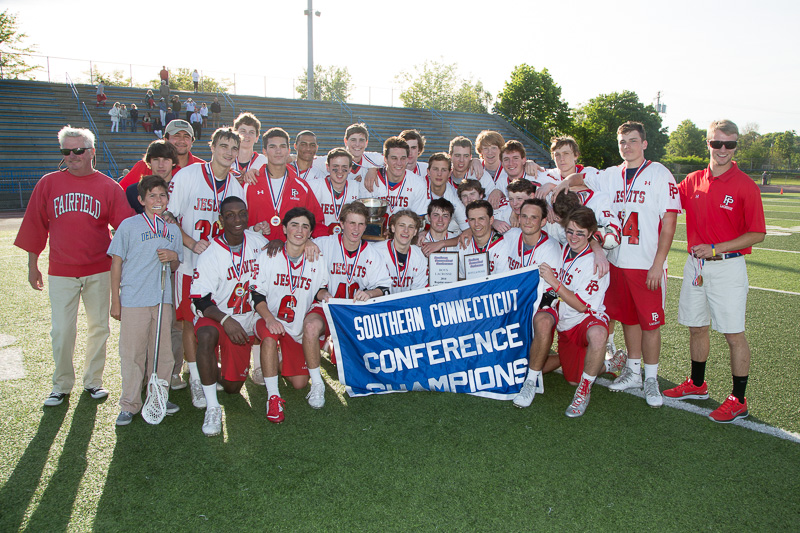 By Dan Nowak, Register Staff for Fairfield Minuteman, May 29, 2014

WEST HAVEN >> Guilford boys lacrosse goalie James Bright did everything he could, making 22 saves to keep the SCC tournament championship game against Fairfield Prep a close one for the Indians.

But the constant barrage of Jesuits shots took its toll on Bright, especially the last 7 minutes of the second quarter, as Burke Smith and Austin Sims each had two goals and an assist to lead No. 1 seed Fairfield Prep to a 8-5 win over No. 2 Guilford at Ken Strong Stadium.

The Jesuits, who outshot the Indians 35-22, earn their fourth straight SCC tournament championship and 11th overall.

“You have to give a lot of credit to their goalie for keeping Guilford in the game,” Sims said. “I thought we came out with energy and eliminated our past mistakes. But he (Bright) made some big saves."

“Overall we weren’t concerned because even though it was 7-5 late we were still in control. It was great to contribute and help us win another championship.”

“Naturally we’re disappointed with the outcome, but I’m satisfied with our effort,” Guilford coach Brian White said. “We got a great effort from our goalie, he certainly kept us in the game. But Prep’s goalie (John Connor, nine saves) is a great goalie too and made some big saves.”

The turning point in the game came midway in the second quarter after Guilford’s Robert LoRicco’s low shot gave the Indians a 4-3 lead. The Jesuits responded with four unanswered goals and the Indians never recovered.

“Those four goals might have been a turning point, but Guilford’s goalie was the difference in this game,” Fairfield Prep coach Chris Smalkais said. “He made the saves to keep them in the game. We were getting frustrated and gripping the sticks too tight.

“We shot the ball poorly today. But it’s always nice to have your team play for a championship and hopefully that continues in the (CIAC Class L) state tournament.”

“We played one of our best games of the season,” Bright said. “The result wasn’t what we wanted but we played hard and left it all on the field. I was in a zone today and I was focused, but everyone was focused on our team.

“It’s a little frustrating, but hopefully this ignites us for the (CIAC Class M) state tournament because now we know we can compete and hold our own against one of the best teams in the state.”