Sims & McKinney are SCC Scholar-Athletes
cadams
May 29 2014 12:43 PM
Share to FacebookShare to TwitterShare to LinkedInShare to PinterestShare to EmailPrint this page 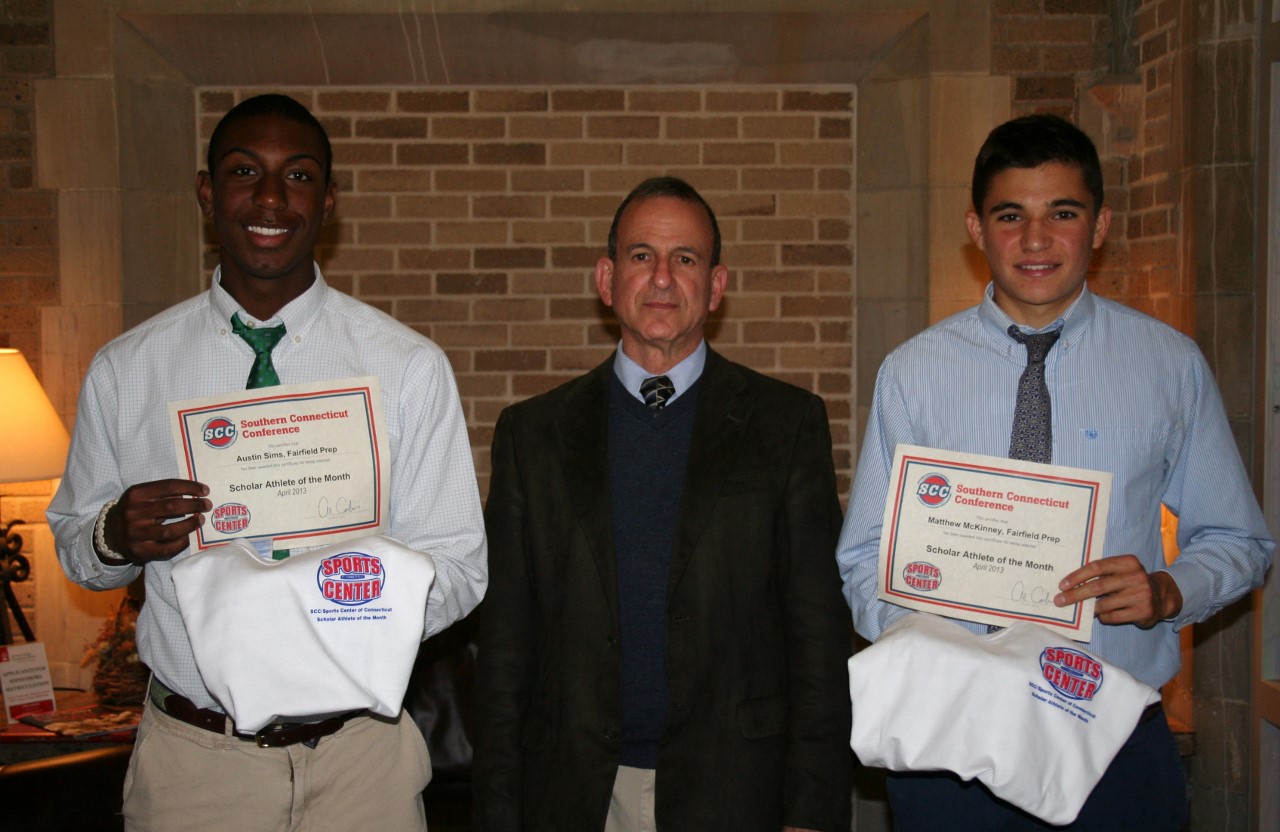 Senior captains Austin Sims (Lacrosse) and Matt McKinney (Tennis) were both recognized for their sport leadership and athleticism, and have been named The SportsCenter of Connecticut/Southern Connecticut Conference Scholar Athletes of the Month. Student athletes who are selected must be a varsity letter winner and have a 3.0/B average while demonstrating leadership qualities such as: being a positive role model; helping teammates overcome adversity; showing a commitment to self-improvement; or putting the needs of the team before themselves. Recipients receive a certificate and commemorative tee-shirt

Having excelled in his academic life and in two varsity sports (lacrosse and soccer), Austin Sims has distinguished himself as a true scholar athlete at Fairfield Prep. Each new level of achievement in the classroom and on the fields has led to a new level of challenge which Austin has taken on with confidence. He has achieved at the honors level each year while earning and taking on an increasing level of academic rigor with each succeeding year. Austin will conclude his academic career at Prep having taken eight honors level classes and two AP courses, including four years of Math at the honors level. His solid consistent efforts have earned him the recognition of the National Honor Society and recognition as an SCC scholar athlete. In addition to his contribution to Prep athletics Austin has made a solid contribution to the Prep community by his involvement in the Peer Tutor program and to the local community through service by committing his athletic talents to the volunteer programs at the Wakeman Boys and Girls Club and to the local Jack and Jill Organization. Significantly, Austin has found perspective through his service and clearly understands the importance of utilizing his talents for the benefit of others. He is well deserving of recognition as a scholar athlete and will continue his academic growth and athletic pursuits as a lacrosse athlete at Princeton University beginning in the fall of 2014.

An outstanding scholar athlete, Matthew McKinney is a young man who has thrived on the academic and athletic challenges he has engaged in his Prep years. In his academic life, Matt has engaged the highest level of challenge having taken eight honors level and six AP level courses, all available courses at the AP or Honors level. He has earned at honors level in all of his Prep years and highest honors level for the past three. Matt’s Honors Chemistry teacher described him as one who quietly achieves with the best in his class, demonstrating an excellent work ethic and great balance. Determination and balance characterize Matt’s outstanding academic record, especially when viewed alongside his standout athletic efforts and achievements. As an athlete, Matt competes at the varsity level in two highly successful sports and in fact, this spring Matt moved from state championship ice as a varsity hockey athlete to the number one spot on Prep’s Tennis Team. Achievements in the classroom are managed well with his efforts on the ice and on the tennis court, and complement well with a life of service to the Prep community and local community. Matt serves the Prep community as a Peer Tutor and has contributed his volunteer efforts to the local community through Operation Hope in Fairfield where he works in the food pantry and soup kitchen. Matt will continue his intellectual exploration and academic growth at Colby College beginning in the fall of 2014.