Prep Baseball on a Roll!

Prep Baseball on a Roll!
cadams
May 16 2014 10:40 AM
Share to FacebookShare to TwitterShare to LinkedInShare to PinterestShare to EmailPrint this page

The Prep athletic department has been on a roll in recent seasons in a variety of sports. Now its baseball team has joined the formula of success, winning 14 of its first 16 games and gaining the No. 1 ranking in Connecticut. 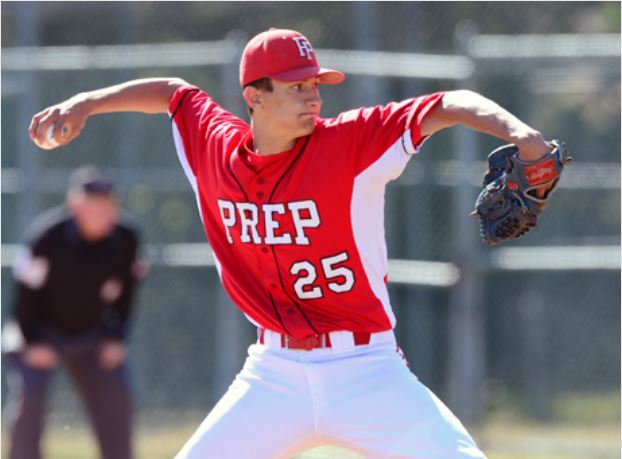 The Fairfield Prep baseball team has spent the past few years building its program back up. If there was any season they should’ve finally broken through, it was this one.

Fairfield Prep athletics in general are in the midst of a strong run. The hockey team repeated as CIAC Division I champions last winter. Both the football and basketball teams played for state titles in 2013-14. The swimming team placed second at both the Class LL and State Open championships to Greenwich, arguably the best program in all of CIAC sports. The perennially strong Prep lacrosse team is looking for its third straight Class L crown this spring, and is ranked No. 18 in the super-competitive Tri-State area by LaxLessons.com.

Jesuits baseball has kept pace with their brethren. They're 14-2 and ranked first in the New Haven Register Top 10 poll.

"Having been involved in hockey as a coach and as a player, we've had a culture of success in that program that's been very significant. I think it's spilling into other sports. I give a lot of credit to the guys in each individual sport. It's been a really good time to be involved as a teacher and as a coach at the school."

The baseball team would have had lofty expectations no matter where Prep's other teams set the bar. They went all the way to the state Class LL semifinals last season before losing to eventual winner Amity, and returned seven of their 10 starters.

"We knew we had a good group of guys coming back," said Mauritz, whose chief assistant is Prep's imminently successful hockey coach, Matt Sather. "It was just a matter of finding the right guys to replace the key guys that we lost.

"I think many of them were maybe a little surprised by how they did (last season). But on the other hand, I think deep down, they knew they had it in them. Getting that far and getting a taste (of success), getting a whiff of it, really made them hungry. They're a pretty driven group."

The Jesuits have used baseball's tried-and-true blueprint for success this spring — pitching and defense. The pitching staff has an ERA of 3.50, and opponents are hitting just .264 against it. Junior Kevin Stone leads the team in wins (5-0), ERA (2.28) and strikeouts (34).

Prep's defense has a .956 fielding percentage and has turned 10 double plays.

"It (the pitching) has been really good," Mauritz said. "(Stone) had a very good sophomore year and stepped up to be our Number One-A or Two. He started in the state semifinal for us last year, and he came up big in the first round of the state tournament. He put the stop on Simsbury after it gained a significant lead on us. He's a pretty confident guy who has three solid pitches that he throws for strikes, and he throws relatively hard for a junior in high school.

"We've gotten some solid starts out of some of our other juniors, such as Dan Schemdlin (2-0). Last week, a young guy, (junior) John Carroll (2-0), who had been working as a reliever the last few years, got his first start and got a win, so he'll probably get another start or two as we work our way through this year."

Sophomore Grant Stone (2-2) has been another key player in the rotation.

Mauritz, who played for long-time Prep baseball coach Ed Rowe while in high school and took over for his mentor in 2006, is no stranger to success himself. Besides serving as Sather's chief hockey assistant, he played four years of college baseball at Providence. His 1995 team at PC went 44-15 and appeared in the NCAA Division I regional in Wichita in one of the school's last seasons of varsity baseball.

The success lives on.