Lacrosse advances to Championship!
cadams
Jun 6 2013 2:41 PM
Share to FacebookShare to TwitterShare to LinkedInShare to PinterestShare to EmailPrint this page 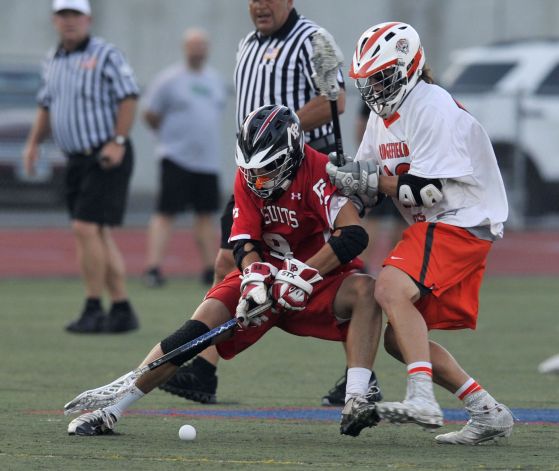 NORWALK -- One side viewed the Division L boys lacrosse semifinal game between Fairfield Prep and Ridgefield as a dominant second-half performance in which that side efficiently cashed in on its chances. The other side saw itself on the bad end of poor officiating. But no matter how you look at it, the Jesuits are headed back to the state championship game. The fourth-seeded Jesuits scored six fourth-quarter goals, keying their 12-9 victory over top-seeded Ridgefield on Wednesday night at McMahon's Casagrande Field. "They're well-coached," Prep coach Chris Smalkais said of Ridgefield. "I am excited for our team today."

Kevin Brown scored five goals, and David White had a goal and four assists, keying Prep to its eighth consecutive state championship game. "It's the best feeling in the world," Brown said. Prep (17-3) will try to claim its second straight Division L championship -- and sixth in eight years -- Saturday at 1:30 against third-seeded Staples at McMahon. "We're excited to play Saturday," Smalkais said. "We've seen (Staples) a little bit, and we'll prepare for them the next couple of days."

Calvin Dearth led the Tigers (17-4) with three goals, but they lamented Dearth's third-quarter shot, which officials ruled to have hit the crossbar, though it appeared to hit the net, which would have given Ridgefield an 8-6 advantage. "Everybody here knew that was a goal," Ridgefield coach Roy Colsey said. "I'm just extremely disappointed that that happened."

Instead, the Tigers -- beside themselves that a goal wasn't ruled -- were flagged for unsportsmanlike conduct. "One of my kids expresses his displeasure, and they score," Colsey said. "That took all the air out of our sails: a horrible call on the biggest stage, and it's something that's so obvious. I'm not surprised ... but tonight was by far the worst I've ever been a part of."

White tied the score on the ensuing man-advantage, just 31 seconds into the fourth, which unleashed a barrage of six straight Jesuits goals. "We challenged our team to be more efficient offensively," Smalkais said. "And we were." Prep outshot Ridgefield 20-10 in the second half and 11-6 in the final quarter. "We tried to stay composed the whole time," Brown said. "We got a ton of opportunities, we just needed to start finishing."

After William Bonaparte opened the scoring 3:34 into the game, the Tigers scored into their own net, and John Edmonds was credited with the game-tying goal. Prep led Ridgefield 3-2 after one, thanks to Brown and Tim Edmonds' goal, and Connor Henry's best save, in which he stymied Simon Mathias' try in the quarter's final three seconds. "I thought (Henry) played great," Smalkais said. "He made some saves in some key moments of the game."