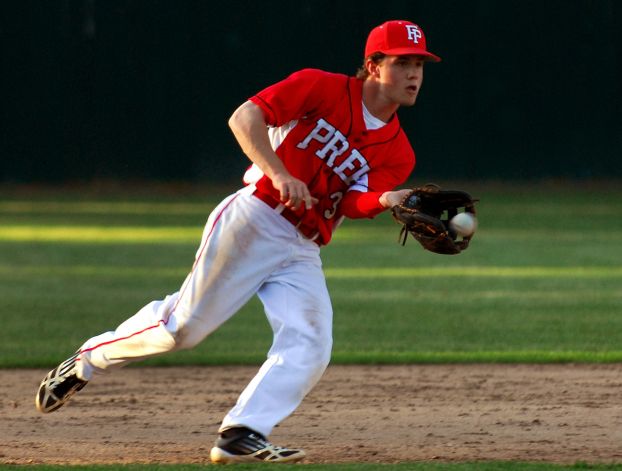 BRISTOL -- For five innings, the Fairfield Prep baseball team pitched, hit in the clutch and frustrated Amity for the second time this year. But in the sixth, the Spartans would not be denied. Sixth-seeded Amity scored all three of its runs in the bottom of the sixth and held off the 10th-seeded Jesuits 3-2 in Tuesday's Class LL semifinals at Muzzy Field.

Senior pitcher Sam Nepiarsky surrendered only two earned runs in six innings, improving to 9-0. The Spartans (21-4) advanced to their first state championship game since 2007 and will play fourth-seeded Southington either Friday or Saturday at Middletown's Palmer Field. "We haven't been back in a little bit," Amity coach Sal Coppola said. "It feels good."

Sophomore pitcher Kevin Stone struck out four and allowed three runs in 5 1/3 innings to take his second loss of this year. The Jesuits ended their season 18-7. "Kevin had a great effort tonight," Prep coach Rudy Mauritz said. "He did a very good job against a very good team, and I'm very proud of his effort."

After being shut out against Prep in their first meeting, Amity put four of its six leadoff hitters on base but could not push a run across against Stone for the first five. Stone pitched with a runner on third and two outs in each of the first three frames but bore down, keeping the Spartans off the board.

"We didn't come up with the big hit," Coppola said. "Our guys have come up with big hits all year, and sometimes you hit the ball at people." But Amity finally broke through in the sixth. Trailing 2-0, the Spartans' first two hitters, Jake Russo and Anthony Capozziello, singled. Pinch runner Sean Beaulieu stole third and Capozziello followed to second, and Sebastian DiMauro followed with a double that tied the game. "I think we were very aggressive trying to get men to third base," Coppola said. "DiMauro had a big game for us. That was a huge hit for him."

Justin Ashworth singled home DiMauro, giving the Spartans their first lead. "It felt excellent," Ashworth said. "To come through felt amazing." Senior pitcher Michael Concato walked the first two batters he faced in the seventh but retired the next three, striking out Chris Collins to end the game and earn the save. "He walked the first two, and I was like 'did we do the right thing?'" Coppola said. "Mike is Mike, and he's pitched so well all year. We had to go with him."

"Sometimes you have to tip your cap to the opposition," Mauritz said. "They're a very good team." Prep scored both of its runs in the third inning. With first and second and two outs, Shawn Blake's single drove in Joe Ganim and put Prep on the board first. Stone followed with a single that scored Collins, enhancing that advantage to 2-0. "That's the way we do it," Mauritz said. "It's the way baseball is played and the way we play."

BRISTOL -- The Fairfield Prep baseball team got a slight break when it arrived at historic Muzzy Field for the first time in over 25 years Saturday. Bristol Central standout Matt Blandino had started the previous round for his team on Wednesday against NFA, meaning the major league prospect would only be available to come out of the bullpen if needed. By the time Blandino entered the game in relief in the fourth inning, the Jesuits had the lead and their starter was in such a groove it was never going to be relinquished.

Kyle Mollo allowed two runs on four hits in a complete-game effort as the No. 10 Jesuits continued their magical run in the Class LL tournament with a 6-2 win over No. 2 Bristol Central in the quarterfinals. Fairfield Prep will take on Amity on Tuesday at 7 at the same ballpark for a place in the final. "We're just out here playing the game," Jesuits coach Rudy Mauritz said. "In a tournament you play who you get. (Bristol Central) had a very good season. The guys came out and worked hard, put pressure and came away with a win."

After the teams traded runs in the opening inning, Mollo settled in to claim the victory. The senior retired 13 of the last 14 batters he faced, including recording his only two strikeouts in the seventh inning. "Mollo did a great job of settling down, basically scattering four hits," Mauritz said. "That's a testament to his character and who he is as a person. He and (catcher) Jake Berry did a good job of keeping (Bristol Central) off balance."

Prep pulled away during a mistake-filled top of the fourth inning. Despite not hitting a ball past the infield, the Jesuits scored three times, two as a result of strikeouts where the runners reached base, and a crucial throwing error by Blandino. "(Bristol Central) made a few mistakes," said Prep shortstop Dean Lockery, who turned in an excellent performance defensively. "The first few innings we were able to get a run because we got the leadoff hitter on base. We just kept doing what we're good at doing."

Blandino struck out nine in four innings of relief for the Rams, who saw their season end at Muzzy Field in the quarterfinals for the second consecutive season. Prep chased Rams starter Michael Tessman after he gave up four hits and a walk in 1 1/3 innings. "It was great to play in this atmosphere," Mauritz said. "A place so steeped in history on a great night against a great team."

The Jesuits defeated Amity 1-0 when the teams met April 25. The Spartans have reached eight of the last 12 Class LL semifinals while Fairfield Prep is searching for its first state title. "At this time of the year you're going to see the best teams and historically Amity is one of those teams," Mauritz said. "They are a great team and it's going to be a challenge."

Plus, watch YouTube highlights of First Round victory over Simsbury 8-4

RIDGEFIELD -- Collin O'Meara wore the stunned gaze of a hockey goalie, beaten through the five-hole and scanning the space around him for leaks. Timo Muro's laser of a throw from center field on a potential go-ahead sacrifice fly had, in fact, caught the entire Ridgefield defense by surprise, sailing over the cut-off man before hopping through the senior catcher's wickets and allowing a dead-to-rights Fairfield Prep baserunner to slide home safely. That was the go-ahead run Thursday in the eighth inning of the visiting Jesuits' appropriately stunning 6-5 victory Thursday afternoon in a Class LL second-round matchup at Tigers Stadium, now the site of both of the Tigers' postseason exits.

The 10th-seeded Jesuits rallied to tie the game in the seventh inning on Jake Berry's one-out single and won it in the eighth on a sac fly from David Gerics, their starting pitcher, who was chased in the third inning, when the seventh-seeded Tigers scored all five of their runs. Both starters were knocked out in the third, setting up a battle of the bullpens that tipped Prep's way thanks to 5 1/3ï»¿ scoreless frames from righty Alex Pinkus that, coupled with some costly walks and a few defensive miscues, conspired to bring a swift end to the Tigers' season, their finest in several years. "We had that spurt that's been missing over the past few weeks," Paul Fabbri, Ridgefield's first-year coach, said of the Tigers' five-hit, five-run third. "But as quickly as we got hot, we went ice-cold again."

Pinkus was partly to blame, allowing three hits and a walk and striking out three in what turned out to be a tide-turning long relief appearance. And with the Jesuits' best pitcher, Kevin Stone, exhausted in an earlier round, Pinkus' performance was that much more vital. "(Pinkus) did a really good job of mixing his pitches," said Jesuits coach Rudy Mauritz. "He kept them off-balance. He's a really bright kid, he's savvy, and it was good to see him apply his baseball guile out there today."

Fabbri had pulled the trigger on his own starter at just the right time, lifting right-hander Joe Malley with one out in the third and replacing him with southpaw Colin Virag. Virag was the perfect antidote to a lefty-heavy bottom half of the Jesuits' order that had smacked three straight singles and delivered the game's first two runs off Malley in the second.

After Gerics' run-scoring double knocked Malley out with one out in the third, Virag came on and consistently minimized damage until his exit with one out in the sixth. With Prep's bats held in check through the middle innings, the Tigers sprang to life in the third, the big hits a two-run triple from Jason Marra and run-scoring singles from Rob DePalma and Ryan Debany.

The Jesuits would, however, muster some late offense, climbing back to within 5-4 in the fifth on Chris Sutay's run-scoring groundout and tying the game in the seventh when a walk and a sac bunt led to a pivotal Ridgefield throwing error. That set the stage for the late heroics of Berry, the Jesuits' No. 8 hitter.

In all, the Jesuits outhit the Tigers 13-9, their production distributed evenly throughout the lineup. "In order to win at any level, you need production from 1-9 and sometimes even a 10th or 11th guy," Mauritz said. "Everybody's got to contribute, and that's the way we've been all year. ... This group's been a very resilient group. One of the last lines of our fight song is, 'We never say die.' We really embody that never-say-die attitude."