Gerics & Culligan are Scholar-Athletes
cadams
May 21 2013 12:01 PM
Share to FacebookShare to TwitterShare to Google+Share to LinkedInShare to PinterestShare to EmailPrint this page 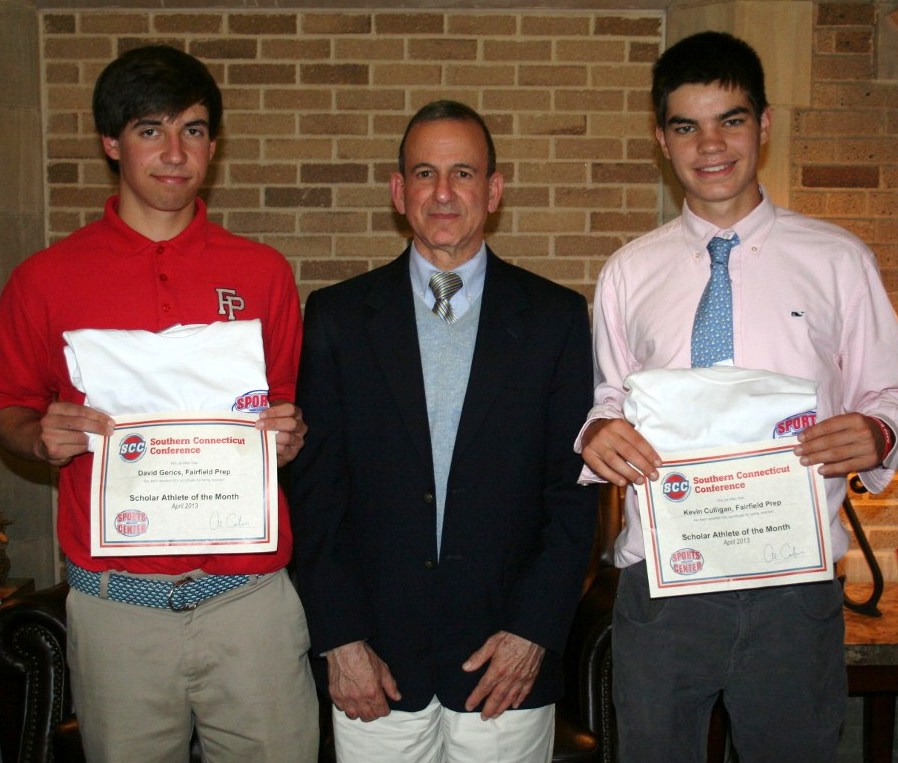 Seniors David Gerics (Baseball) and Kevin Culligan (Tennis) were both recognized for their sport leadership and athleticism, and have been named The SportsCenter of Connecticut/Southern Connecticut Conference Scholar Athletes of the Month.

Student athletes who are selected must be a varsity letter winner and have a 3.0/B average while demonstrating leadership qualities such as: being a positive role model; helping teammates overcome adversity; showing a commitment to self-improvement; or putting the needs of the team before themselves. Recipients receive a certificate, commemorative tee-shirt, and a SportsCenter pass.

David is an outstanding student and athlete who has played both football and baseball at Fairfield Prep for the past three years. In fact David has been a part of the success achieved in both programs, was recently named on the All-SCC Quinnipiac Division baseball team, and will continue his baseball career at Pomona College next year. As a student David is among the very best in his class having taken the strongest course of studies at Prep and achieving while managing high levels of involvement in Prep athletics. David’s accomplishments in the classroom have earned him honors in each of his Prep years as well as the recognition as a member of the National Honor Society and Spanish Honor Society. In both organizations David is committed to serving others both on campus and in the community. He serves the Prep community as a Peer Tutor and has performed service at the Kennedy Center through his senior year.

Kevin is an outstanding student and athlete at Fairfield Prep who has excelled in the classroom and in Prep’s tennis program. Kevin has been a member of the Prep varsity tennis team for the past four years and is team captain in his senior year. He leads a very active life on campus, sharing his energies with our Campus Ministry program through leadership in Prep’s Kairos Retreat and Freshman Retreats. Kevin has also explored his interests his involvement in our Stock Market Club and Political Awareness Clubs. As a student Kevin has achieved with the best in his class while taking the strongest course of studies offered. His academic achievements have earned Kevin the distinction as a member of Prep’s National Honor Society. He has also been recognized as a National Merit Finalist. Kevin serves the Prep community as a Peer Tutor and the local community through the support of the Grassroots Tennis Program which brings tennis to urban children. Upon graduation from Prep Kevin will attend the University of Notre Dame.