Fr. Shaughnessy, S.J., is Graduation Speaker
cadams
May 20 2013 3:21 PM
Share to FacebookShare to TwitterShare to LinkedInShare to PinterestShare to EmailPrint this page 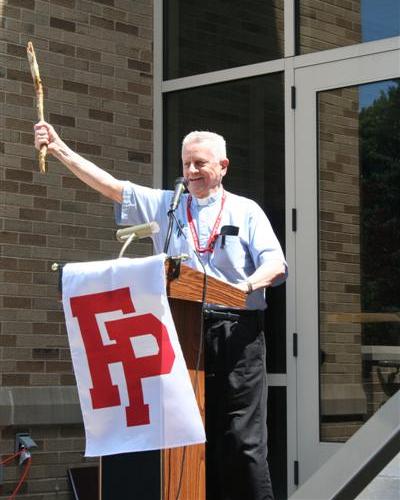 Fairfield Prep is pleased to welcome back Rev. Martin G. Shaughnessy, S.J., as the featured speaker at the 71st Commencement Exercises to be held on June 2, 2013, in Alumni Hall. Fr. “Marty” Shaughnessy served as a theology teacher at Prep for 42 years, until his recent assignment in 2010 to Boston College High School as Minister of the Jesuit Community. During his time at Prep, he became a living legend, utilizing his intelligence, oratorical prowess, and humor to teach and engage young men in theology class. When he left Prep, students, faculty and staff gathered in Kartovsky Quad and cheered for him as he retired his JUG (Justice under God) flag, Star Wars light saber and Moses stick - inspiring all to follow the Lord and proclaim "Hallelujah!" (See video!) Fr. Shaughnessy has influenced thousands of students passing through the halls of Fairfield Prep, and the graduating Class of 2013 was the last Prep class to experience him as a teacher during freshman year.

At Fairfield Prep, Fr. Shaughnessy was elected to the Hall of Fame in 1985, served as chaplain to both the football team and wrestling teams, and moderated several clubs including the Senior Key Club, Current Events Club and Weather Club. In 2011, Prep instituted the annual Rev. Martin G. Shaughnessy S.J., Ignatian Educator of the Year Award in his namesake, which is awarded to a Prep staff member who demonstrates the highest qualities of an educator following the Jesuit mission, ideals and teaching tenets. He assisted in the spiritual ministry at Prep, and also worked within the Diocese of Bridgeport training catechists and providing pastoral ministry in parishes. He spent much time serving at Notre Dame Parish in Easton, where he celebrated the Children’s Masses regularly and helped in the formation of catechetical teachers.

Over his vast and accomplished Jesuit career, Fr. Shaughnessy has worked in teaching and pastoral work all over the United States, including Connecticut, California, Utah, Maine, North and South Carolinas, Florida, New York, Massachusetts, Washington and Alaska (where he experienced two earthquakes). He also served in communities in Jamaica and the Bahamas. The Fairfield Prep Community is honored to welcome Fr. Shaughnessy back to our campus, and we look forward to hearing his inspiring words for the Class of 2013.