LAX is #1 in SCC, routs Guilford 14-3
cadams
May 21 2013 12:43 PM
Share to FacebookShare to TwitterShare to LinkedInShare to PinterestShare to EmailPrint this page
State #2 Ranked 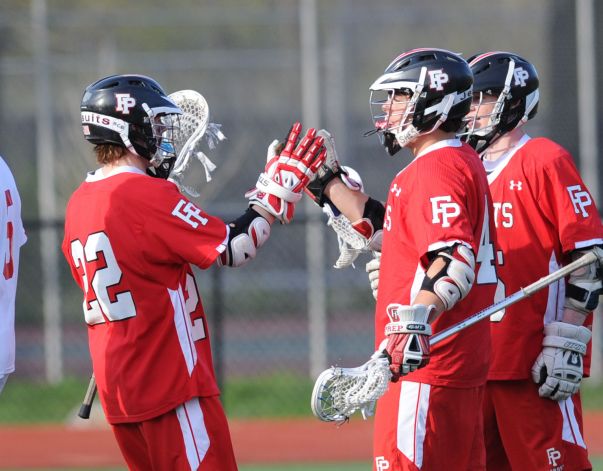 GUILFORD — Just like almost every spring, Fairfield Prep is the Southern Connecticut Conference boys’ lacrosse regular-season champion. The Jesuits (12-3) captured the title for the third consecutive season and seventh in the last eight years with a dominating 14-3 victory over Guilford at Kavanaugh Field Friday night. Fairfield Prep, ranked second in the New Haven Register Top 10 poll, is undefeated in the state this season. Ninth-ranked Guilford finished its regular season at 12-4.

“You’re always happy when you can win your league,” Fairfield Prep coach Chris Smalkais said. “Hopefully we can win the league tournament next week and get prepared for the state tournament. We’re hoping to play our best lacrosse in June.”

Fairfield Prep opened the game with the three goals in the first 5 minutes, two of which came from Tim Edmonds (four goals and four assists). Kevin Carregal scored for Guilford to close it to 3-1 with 3:48 remaining in the first quarter.

The Indians had a couple chances to close the gap to a goal, but a couple of unforced errors gave the ball back to the Jesuits. That two-goal deficit was the closest Guilford came for the rest of the night. Fairfield Prep broke the game wide open when it scored the next nine goals to take a 12-1 lead midway through the third quarter.

A lot of the Jesuits’ damage early came as Guilford allowed Fairfield Prep to run right to the cage up the middle. “Our offense is really starting to click,” Edmonds said. “If they give us the middle, we’ll take it. Then they’ll crouch toward the middle and we’ll have outside shots.”

Guilford coach Brian White knew his team had to play a mistake-free, nearly perfect game to have a chance to win. “I think if we came out as clean as we possibly could and they played poor, we could have had something,” White said. “We came out intimidated and got outclassed all over the field. I think we played a little more scared offensively and some of our kids were afraid to go to the cage.”

The Jesuits took Guilford’s top three scorers in Carregal, John Lisitano and Andrew DePattie out of the game. “Anyone who comes and watches us knows those are our three top scorers,” White said. “If you take them away, we have to find scoring somewhere else. If you look for someone else against this team, it may not come.”

Smalkais said two of the three goals the Jesuits gave up came on transition. “I thought our defense did a great job on their attack,” Smalkais said. “They tried to attack our short stick and midfield defenders and we did a great job.” The Jesuits were also extremely physical, going after Guilford’s sticks with hard hits. “They were coming out on their Senior Night and we knew they would be hyped up,” Edmonds said. “We knew we had to shut them down physically.”

Seven different players scored for Fairfield Prep. Kevin Brown and John Edmonds each scored three times. “We’ve been sharing the ball great of late and finishing our chances,” Smalkais said. “Our guys are unselfish and work every day at making the difficult pass, which makes for nice looking lacrosse goals.” Mark Lisitano and Eric Zergiebel each had a goal for Guilford.

Fairfield Prep outshot Guilford, 35-21. James Bright had 18 saves for the Indians, while Connor Henry had 13 for the Jesuits. 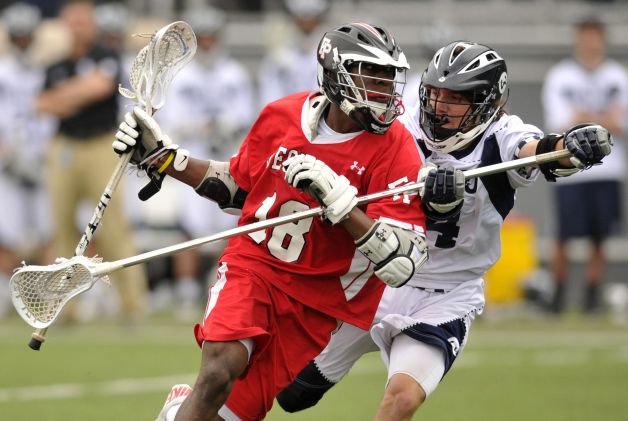 Shots kept coming for the Fairfield Prep lacrosse team. The Jesuits' coach even wished they had finished a few more of them Wednesday. Prep, the state's No. 2 team, still broke away from Wilton in the second quarter, beating the Warriors 16-9 at Tom Fujitani Field. "This game was definitely a breakout game for our offense," said Jesuits senior Tim Edmonds, who had two goals and three assists.

Fairfield Prep (8-4) moved the ball around, withstood Wilton's first pushback in the first quarter and scored five in a row to take a 7-2 lead. It led 9-4 at the half. "We had 25 shots in the first half. The one thing was we just didn't finish chances," Jesuits coach Chris Smalkais said. "I thought we should've finished a lot more opportunities." They finished plenty: a game after scoring a season-high 17 against Amity, they nearly matched it against the Warriors (6-7).

"They're a good team, and we made a lot of mental errors," Wilton coach John Wiseman said. "The kids played hard. It didn't translate. A good team like Prep will capitalize on those mental errors."

Kevin Brown and Austin Sims scored four goals apiece for Fairfield Prep and Brown added an assist. The Jesuits were up 2-0 92 seconds into the game. Wiseman called his first timeout. Ted Ottens won the draw, the Warriors set up in the Prep end for four shots, and the fourth went in for the first of Tom Hayes' three goals. Brendan Devane tied it three minutes later. "We kind of answered back, which I was pleased with," Wiseman said. "Silly mistakes cost us."

They had the ball quite a bit with help from senior Troy Foreit. Foreit finished roughly even on faceoffs with Wilton's Ottens, but Foreit controlled most of them early as the Jesuits built their lead. "Troy went 50 percent against one of the top faceoff guys in the country," Smalkais said. "He's a converted defenseman. He committed himself to learning faceoff this year."

Ottens scored two Wilton goals himself directly off faceoff wins. The first ended that 5-0 Prep run. "That kid's really good," Foreit said. "I tried to have a quick reaction time. He's really strong. I faced him all winter (at Chelsea Piers in Stamford)." Wilton had good possession time in the third quarter but emerged no closer. Hayes' hat-trick goal was answered in 30 seconds by Burke Smith.

Mike Burns scored on a man advantage with 1:31 left in the period; quick Jesuits passes set up Sims for his third goal, making it 11-6 after three. It could've been worse for the Warriors, but David White scored just after the third-quarter buzzer.

The Jesuits had to dig deep to pull out a win against one of many teams trying to take away their title as the best team in Connecticut. Kevin Brown (four goals, one assist) and David White (two goals) combined for seven points as the Jesuits held off hard-charging Greenwich for a 7-6 victory on Wednesday, their fifth straight win. Greenwich (6-2), meanwhile, saw its six-game win streak come to an end.

"We have a battle-tested group," said Fairfield Prep coach Chris Smalkais, whose team improved to 6-2. "We have a number of seniors that have been three-year starters. They know what it takes to perform at a high level; they understand what competition is."

After tallying just three goals in 40 minutes of action, the Cardinals' offense burst into life in the form of Kyle Foote. The senior scored consecutive goals 43 seconds apart, on identically positioned isolation sets, cutting a 6-3 deficit to 6-5. Brown reestablished a two-goal lead with 5:15 left before Alex Moeser made it 7-6 with 3:31 left.

"Every game you're not sure who's going to get it but (Foote) started getting hot and we rode him," Greenwich coach Scott Bulkley said. "He's a very special player for us. With Kyle, (Moeser), (Declan Curran) and a lot of other guys, we have guys that can fill it up."

And then the drama began. Moeser fired wide with 2:21 left, but the Jesuits were unable to run out the rest of the clock. The Cardinals took possession with 1:16 left and had multiple chances to tie. Foote fired a shot that bounced off the post and clear, and a last-ditch shot from 25 yards out by Ryan Flippin with seconds remaining was blocked by the Jesuits' defense.

"I'm extremely proud of my team, they didn't give up and they fought back," Bulkley said. "If you want to win a game like this, you have to bury those shots (Greenwich hit the post six times) and they're going to learn that. I'm extremely proud of my guys. There is a lot of good things we did; the only thing we missed was finishing our own shots."

The defending Class L champion Jesuits got just enough offense to win on a day when shooting accuracy was hard to come by. That, combined with a pair of outstanding performances in the cage by Prep's Connor Henry and Greenwich's William Waesche, made scoring very difficult.

Cardinals faceoff man Graham Savio kept his team in the game with crucial draw controls during the fourth-quarter frenzy. The senior captain had missed the last 10 days with a concussion but returned to make an immediate impact.

"(Savio) played great, he did have a little rust in the beginning, but I thought he really started to pick it up at the end," Bulkley said. "He's a huge part of our team. He can keep us in any game. Any game we fall behind in we can get right back in it because of him."

The two teams entered Wednesday ranked among the top five of virtually every state lacrosse poll. While that could mean a rematch between these non-conference foes in the state tournament, Smalkais wants his team to peak at the right time of the year.

"The season is a journey, not a sprint," Smalkais said. "It's April 24th; we have a long way to go to get to June. We are constantly improving on a daily basis; we hope to be playing lacrosse in June."